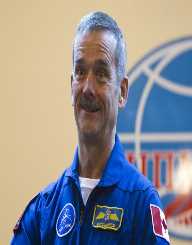 Chris Hadfield is an astronaut who took the power of Twitter to the outer space and built a worldwide fan following through his feeds while at the International Space Station. His stay at the space station began in December 2012 and continued for the next five months. In this period, he kept informing the world about living there through his twitter account. He is the first Canadian astronaut who lived aboard the International Space Station.

Chris Hadfield was born on August 29, 1959. His birthplace is Sarnia, Ontario, Canada.  His star sign is Virgo. His parents are Roger and Eleanor Hadfield. Hadfield dreamed of becoming an astronaut from an early age. Chris Hadfield was very curious about what’s up there. But there was no astronaut program in Canada, and Hadfield became a skier in his teenage years. When he was 15 years old, he won a scholarship to train as a glider pilot.

In 1978, Chris Hadfield joined the Canadian Armed Forces and was trained at the Royal Roads Military College, British Columbia. He graduated in 1980 and then went to the Royal Military College in Kingston, Ontario. After another two years of training as a pilot, Chris Hadfield graduated in 1982. He was granted a Bachelor of Engineering degree in Mechanical Engineering.

His training continued further, and he trained as a fighter pilot at the US Air Force Test Pilot School. At the same time, he got involved in research projects with NASA.

In the early 1990s, Canada launched a new space program. By then, Hadfield’s reputation as an exemplary pilot had spread far and beyond the military circles. Chris Hadfield got selected to join a team of four astronauts who would be trained for the new space program. The list of potential candidates was 5330. Chris Hadfield quickly became an integral part of Canada’s space programs. He spent nearly 20 years working there, part of which was as the Director of operations for NASA at the Yuri Gagarin Cosmonaut Training Center in Russia.

In 2001, Chris Hadfield made his first trip to the International Space Station. The duration of the mission was 11 days during which he left the space station on occasions. He became the first Canadian to float in space freely. Chris Hadfield was also appointed as the Chief of International Space Station Operations. He served at this post for two years.

Chris Hadfield went to space again in December 2012, accompanied by two other astronauts. Their stay this time was five months long – one of the longest missions to the International Space Station. This was a dream come true for Hadfield who had always wanted to live in space. He began sharing his daily life activities at the space station via his twitter feed. Chris Hadfield also shared breathtaking photos from space. Soon, space addicts came in flocks and started following him and sharing his content. His fan base grew to a massive size rapidly. He currently has more than 2.25 million followers on Twitter. With the help of his son Evan, he also recorded a video tribute to Space Oddity by David Bowie. The song went viral, and further added to Hadfield’s popularity. Hadfield returned to Earth on May 13, 2013.

Chris Hadfield as also published an autobiography An Astronaut’s Guide to Life on Earth: What Going to Space Taught Me About Ingenuity, Determination, and Being Prepared for Anything. The book is a New York Times bestseller.

Chris Hadfield is married to his girlfriend from high school, Helene Hadfield. They have three children – two sons Kyle and Evan and a daughter named Kristin.