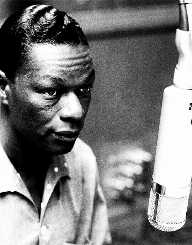 Nat King Cole was born on March 17, 1917, in Montgomery, Alabama. He was the youngest son of Reverend Edwards Coles and Perlina Coles. At the age of four, Cole's family shifted base to North Chicago, Illinois where his father became the pastor of the church. Nat King Cole's first lessons in music were imparted by his mother, a church organist. She taught her son the art of playing the piano. Soon after, Cole started playing the organ and singing in the choir of his father's church.

During his teenage years, Nat King Cole began taking formal lessons in music. He polished his music sense by learning different genres of music like jazz, gospel music, and Western Classical music. At the age of 15, Cole dropped out of school to pursue a full-time career in music. He started out as a jazz pianist.

In the year, 1936, he took the byname Nat Cole and left Chicago to form his own jazz band 'Rogues of Rhythm.' His elder brother, Eddie, a bassist, joined forces with Cole's group and made their first professional recording.

Nat King Cole and his brother were signed up to perform with the all-black Broadway musical revue 'Shuffle Along'. Though Eddie stayed back, Cole joined the troupe as a pianist on their national tour. After completing the tour, Cole started working on his music and subsequently, in 1937, he collaborated with guitarist Oscar Moore and bassist Wesley Prince to form the legendary music group 'The King Cole Trio.' The group members were masters in swing music and hence were also known as 'King Cole and His Swingsters.' The music group performed in local bars and toured extensively.

In the late 1940's, the King Cole Trio signed a contract with Decca. Their very first achievement came in the year 1943 with the release of Cole's composition 'That ain't Right.' The song penned by Cole instantly struck the chord and became a chartbuster. In the same year, their contract with Decca came to an end.

The trio reached the pinnacle of success when Nat King Cole started doubling as pianist and singer. The trio was soon signed up by Capitol Records. In the latter half of 1943, Nat King Cole and his Swingsters achieved commercial success with Cole's first vocal hit 'Straighten Up and Fly Right.' The song penned by Cole was inspired by the theme of his father's sermons.

In the following years, the King Cole Trio reached the peaks of their career as they consecutively belted out chart hits like 'The Christmas Song,' 'For Sentimental Reasons,' 'Nature Boy' and many more.

Though Nat King Cole had gained prominence as a jazz pianist, his soft baritone voice and sophisticated style of singing mesmerized his audiences prompting him to pursue a career as a solo artist. Cole emerged as the singing sensation of his time releasing track hits one after the other. Some of his best-known works are his signature song 'Unforgettable' (1951), the holiday hit 'The Christmas Song' (1946), 'Monalisa' (1950) and the number 1 song of 1951 'Too Young.'

Throughout the 1950's, Cole continued to enjoy stardom and released several tracks that became chartbusters. "Smile," "Pretend," "A Blossom Fell," and "If I May" are some of the well-known songs of that time.

Nat King Cole was not just limited to music. He made several television appearances and had acted in short films and sitcoms. King Cole is the first African-American to host a national television variety show, 'The Nat King Cole Show.' Premiered on November 5, 1956, on NBC, the show began as a 15-minute pops show. But seeing the show's massive popularity, it was later expanded to cover a half an hour slot.

Nat King Cole took his first marital vows at the tender age of 17. He met Nadine Robinson, a dancer while touring with Shuffle Along and married her soon after. The marriage lasted for 11 years, and they got divorced in 1948. Just six days after the divorce from his first wife, Cole married singer Maria Hawkins Ellington on March 28th in Harlem's Abyssinian Baptist Church.

The couple had three biological daughters viz. Natalie, Casey, and Timolin and adopted two kids - a son named Nat Kelly Cole and a daughter named Carole. A solid phase came in their relationship when Cole started having an extra-marital affair with 19-year old Swedish dancer and actress, Gunilla Hutton. However, Maria stayed with Cole until his last breathtaking care of him even during his days of illness.

Nat King Cole was a chain-smoker. By the fall of 1964, he started experiencing severe back pain and rapidly lost the substantial amount of weight. A visit to the doctor revealed a malignant tumor on his left lung. Diagnosed with lung cancer, doctors declared that Cole had only a few months to live. In spite of battling with terminal illness, Cole kept doing stage shows and recordings against the wishes of his doctor.

Cole's condition was gradually worsening, and his left lung was removed on January 25, 1965. A day after Valentine's Day, on 15th February 1965, the 45-year-old velvet-voiced pop star breathed his last.

Cole's last album 'L-O-V-E' that was recorded just a few days before his hospitalization was released after his death. The album garnered many accolades and became one of the major hits of Nat King Cole.