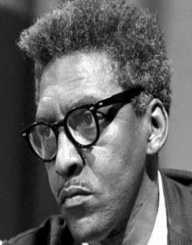 His mother Florence Rustin conceived him as a result of her relationship with West Indian immigrant Archie Hopkins. However, Bayard was raised by his grandparents Julia and Janifer Rustin as their ninth child out of a total of twelve children. He believed his grandparents to be his biological parents and knew his mother as his elder sister until his adolescence.

After his high school graduation, Bayard Rustin attended African Methodist Episcopal Church operated traditionally Black college Wilberforce University in Ohio. His activism in campus organizations invited trouble for him, and he was expelled from the University in 1936 on account of organizing a strike. He joined another historically Black university, Cheyney University of Pennsylvania (formerly Cheyney State Teachers College).

Bayard Rustin moved to Harlem, New York City in 1937 upon completion of an activist training program organized by American Friends Service Committee (AFSC) and got enrolled at the City College of New York. His involvement in heightened activism saw him come in support of the Scottsboro Boys, the nine Black young men accused of raping two white women in Alabama, defending and trying to secure their freedom.

While pursuing his civil rights activist career, one of Bayard Rustin’s strengths was being able to form the perfect blend of different philosophies. His grandmother Julia was a Quaker, and he integrated the pacifism of the Quaker religion with the non-violent resistance philosophy preached and practiced by Mahatma Gandhi.

Bayard Rustin was a devout follower of the theory of socialism propagated by African-American labor leader A. Philip Randolph. During the Second World War, he fought racial differentiation prevalent in the hiring of war-related works at that time and worked in tandem with Randolph in this regard.

He was also mentored by pacifist A. J. Muste, head of the Fellowship of Reconciliation (FOR). Later, during the late summer of 1941, FOR engaged Bayard as their race relationship secretary. Bayard, Randolph, and Muste joined hands together and proposed a protest march against racial separatism and all-embracing discrimination in giving employment.

They met the then American President Franklin D. Roosevelt and humbly informed about their proposed march against racial segregation in the army and favoritism in giving employment by the color of the people. Roosevelt issued an executive order prohibiting differentiation in defense industries and federal agencies.

Randolph, being the leader of the group, canceled the proposed protest march, though the Fair Employment Act was ultimately implemented only in 1948 during the regime of Harry S. Truman. There was some disagreement concerning the success of their targeted objective between Randolph and Bayard. Bayard even voiced his dissent in a national level press conference. However, he regretted his decision of coming out in the open about their dispute afterward.

Bayard Rustin also pioneered the movement against segregation of interstate bus travel. He protested the segregation by boarding a Nashville bound bus from Louisville. Violating the prescribed norm of sitting at the back rows of the bus, he sat on the second row.

The bus was stopped after repeated pleas of the bus drivers to sit on the back rows were unheeded by him. He was arrested by the police, manhandled and was presented to the police station. However, he was later freed without any charge.

In 1942, Congress of Racial Equality (CORE) was founded by activist Bernice Fisher, FOR staffers James L. Farmer and George Houser with some active assistance from Bayard. CORE was created combining the philosophy of pacifism of the Quaker religion and the non-violent resistance theory of Mahatma Gandhi.

Bayard Rustin was very open about his support on the gay rights movement. His open public display of homosexual activity landed him in jail during 1953. He had to undergo a prison sentence of 60 days on that count. He met the champion of civil rights activist Martin Luther King Jr. during the 1950s and worked as his adviser during 1950 and the 1960s.

An openly gay man, Bayard Rustin died on August 24, 1987, on account of a perforated appendix. He was survived by his partner for the past ten long years, Walter Naegle.