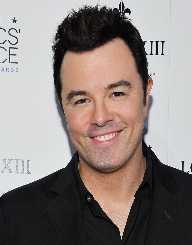 Seth MacFarlane is a household name in the animation industry. He is a Television producer, singer, writer, Actor, and a comedian. Seth has established himself in the animation industry and is famed for his genius sitcom,' Family Guy.' Seth has won numerous awards and has acted in several movies as well as voicing many cartoon characters. Seth is the co-founder of Fuzzy Door Productions'.

Seth MacFarlane grew up in a typical American Family setting. He was born on 26th October 1973 in a small town called Kent, Connecticut. Seth's father, Ronald Milton MacFarlane was a school teacher while his mother Ann Perry Sager was an admissions officer. Ann later died of cancer, living Seth and his sister under the care of their father.

Seth was raised in a relatively stable family together with his sister Rachael MacFarlane who later pursued a career in voice acting. Growing up, Seth knew what he wanted in his life. He knew that animation was his talent.

Seth started drawing cartoons such as the ‘Woody Woodpecker' and Fred Flintstones when he was two years old. A typical nine-year-old boy would be interested in bikes and comic books, but at nine years of age, Seth had a paid job. Drawing cartoons attracted the attention of a local newspaper, and Seth MacFarlane was offered a job as a cartoonist.

Seth MacFarlane enrolled at Kent School in 1991. He continued with his passion for drawing until his graduation in 1995. He later joined Rhode Island School of design where he studied animation.

After successful completion of his education, Seth MacFarlane was awarded a Bachelor's degree in Fine Arts.

Seth MacFarlane started his career as early as nine years old. He worked at a local newspaper as a cartoonist.

After graduating, Seth moved to Los Angeles and got straight to work. His heart was at Disney Productions, but Hanna-Barbera discovered him first. He couldn't pass such an excellent opportunity with a well-established company, and he blended well.

Hanna-Barbera Productions saw Seth's untapped potential after his first film ‘Life of Larry.' Between 1995-1997, Seth developed the Cartoon Network Series. He saw the birth of the famous cartoon characters, 'Johnny Bravo,''Dexter's Laboratory' and ‘Cow and Chicken.'

Seth still had his eyes fixed on his first film ‘Larry and Seth.' After polishing the script and making adjustments, he renamed it ‘Larry and Steve' and made it a cartoon series. Fox Production Company made Seth an offer to do a pilot series. The budget was limited, but this did not hinder Seth from getting busy. He spent Six months working on the project.

After months of hard work and determination, Seth came up with ‘Family Guy,' which he immediately pitched to Fox Production. In 1998, Fox bought the series and made Seth the youngest Executive Producer. In 2002, Family Guy was canceled. The fans were outraged by the termination of the show. Due to public demand and the massive DVD sales,' Family Guy' series was up for negotiation. Fox came to a unanimous agreement, and the sitcom was back on air.

Seth teamed up with Mike Barker and Matt Weitzman and created ‘American Dads' in 2005. The show was well received by fans. He was the executive producer of ‘The Winner' in 2007. In 2008, Seth created the ‘Seth Macfarlane's Cavalcade of Cartoon Comedy.' In 2009, the ‘Cleveland Show' was launched. I was a continuation of the Family Guy.

In 2011, Seth MacFarlane co-produced ‘Cosmos,' an educative Science documentary. Seth starred and co-produced the film ‘A Million Ways to Die in the West.' He later wrote a novel about the movie. In 2012, Seth created and voiced ‘Ted.' It was released on June 29th,2012. Ted is a talking bear who came alive after his companion John Bennet made a wish for him to come alive. John is all grown up, but his childhood friend ‘Ted' is his number one companion. John's  girlfriend hates their childish behavior.

Seth is a multi-talented individual. He has not limited his career to one field. He has ventured into live action acting in ‘The War at Home,' Gilmore Girl's and ‘Star Trek.' While working at Hanna-Barbera, he was also a freelance writer at  Walt Disney TV

Seth has voiced the characters Peter, Stewie and Brian Griffin on Family Guy.

Astronomers recognized Seth's contribution to the Science and Entertainment Exchange by renaming an asteroid to Seth's name in 1999.

Seth MacFarlane has received 28 awards and 105 nominations. In 2000, His outstanding performance in Family Guy bagged him a Primetime Emmy Award. In 2002, He won a second Primetime Emmy Award for the amazing work on the music and lyrics of the cartoon series ‘Family Guy.' Seth was nominated for the Grammys in 2006, 2012 and 2016.

In 2013, during the MTV Movie Awards, Seth won the Best on Screen Duo category for his film ‘Ted.' In the same year, Family Guy won the People's Choice award in the favorite comedy movie category. Ted earned a total of over $218 million.

Seth MacFarlane was called upon to host the 85th Oscar awards which he was also nominated. He became the highest paid TV writer after the multi-million deal with Fox to continue with Family Guy and American Dads for another four years. The ‘Entertainment Weekly'   named Seth as the smartest man on TV.

When Seth wants to unwind, he turns to music. He loves orchestras and jazz. He is also a staunch supporter of gay rights and equal marriage rights. Seth MacFarlane started dating ‘Game of Thrones' star Emilia Clarke in 2012.

Their relationship lasted for one year, and the duo broke up in March 2013. The couple blamed the long distance between them for the failed relationship.

Seth has relations with celebrities like Denise Crosby who formerly starred on Star Trek. She is Seth's distant cousin. Father and son have a close relationship. Seth’s father was the narrator of Family Guy’s Christmas episode. Seth is a social person, and he likes to spend his free time with his best friend Butch Hartman who created ‘The Fairly Odd Parents' in 2001.

Seth was voice trained by a 90-year-old couple. He is also an excellent pianist and an exemplary crooner. Seth is currently worth over $100 million. Seth currently resides in Los Angeles. Seth enjoys outdoor activities and loves golf.

Seth MacFarlane is an atheist.

In 1999, Seth's former school headmaster mobilized a boycott during season one of Family Guy. He cited racism and improper political humor.

This was dismissed after investigations by the media showed that Father Richardson's discontent had to do with the name Griffin that was shared by the school's secretary. Seth defended himself and said the naming was purely coincidental.

Seth is passionate about the environment, Poverty eradication, children, and animals. He has supported some charities like Alliance for children Rights, A place called home, Stand up for Cancer, Los Angeles Police Memorial Foundation among others.

He is a strong cancer awareness advocate. This is inspired by his mother Ann who died of cancer.