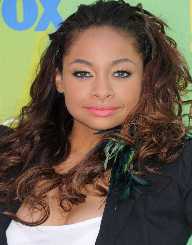 Raven-Symoné is an American Singer, actress and songwriter was born in 1985. She is also a producer and Television Personnel.  She is best remembered for her role Raven Baxter in That’s So Raven. The show turned out to be the best work ever in the production of Disney. She kicked off her career at a young age as a child model. Before her 10th birthday, she had featured in the biggest labels in the US. This caught the eyes of those in the film industry, and before she knew it, she was an actor. She even had the chance of acting with Bill Cosby, a prominent comedian. The multitalented Raven-Symoné has produced bestselling albums. She was only ten when her first album came into being and has since then produced a total of 4 albums. All of which contain her songs.

Raven-Symoné was born on December 10th, 1985. Her place of birth was Atlanta, Georgia in the United States. She is the daughter of Christopher Pearman and Lydia. Her parents played a significant role in developing her career. They discovered her talent at a young age and enrolled her at a child modeling agency.

Raven-Symoné’s family relocated to Ossining located in New York City in 1988. It was here that she began her early education at the Park School.  From there, her acting career started, and she became a hot cake for the film industry. She featured in the series The Cosby Show till the season finale in 1992. The show was hosted by Bill Cosby.

Raven-Symoné began her music career at the age of 7. She was a natural born singer, and the music was in her DNA. Missy Elliot was her vocals tutor. She released her first album in June 22nd, 1993 entitled Here’s To New Dreams.  Two songs in the album particularly became great hits.

From 1993 to 1997 Raven-Symoné featured in the show Hangin’ with Mr. CooperI. Meanwhile, she also had a role in the film The Little Rascals. In 1988 she acted in the movie Dr. Dolittle along with the film star Eddie Murphy. The film was a huge success.

Raven-Symoné released another music album Undeniable in 1999. It was not as successful as the first album. It was of average success.

2003 marked her career turning point. Raven-Symoné reached the peak of her career with her role in That’s So Raven. This was a Disney show in which she acted the part of Raven Baxter. In the coming years, the show achieved the highest ratings compared to other shows that Disney had ever produced. She was also cast in another Disney show The Cheetah Girls.

Raven-Symoné later released another music album with the title This is My Life. She featured in For One Night movie in 2006. During this period she featured in The Cheetah Girls 2 which became a hit. She released another album Raven-Symoné in 2008. Raven-Symoné also was the lead character that year in the film College Road Trip. In 2010 she was cast in Revenge of the Bridesmaids as Joanna Garcia. This was an ABC show which became a great success. Viewers loved it, and even critics had positive comments for the film.  This was followed by her lead character in State of Georgia still of the ABC show. Unfortunately, this show was cancelled while still in its first season.

Raven-Symoné announced that she was involved with another woman in 2014. A year later she revealed that her partner was AzMarie Livingston. In the same year, the two went separate ways.