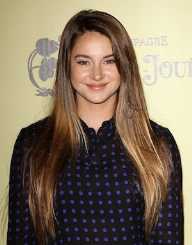 Shailene Woodley was born on the 15th of November 1991 in San Bernardino County California. She grew up in Simi Valley, California with her parents, her father Lonnie Woodley, a school principal and mother, Lori Woodley, a school counselor and her Younger brother, Tanner.

Shailene began as a commercial Model at the tender age of four. Her acting proclivities were apparent from here and by the age of five, she had started attending acting classes. She was evidently bent on an early start in her acting career. She made her first entry into the world of film in 1997 where she acted a minor role in the comedy-drama ‘Replacing Dad'. This movie did not, however, start to air until the 14th of March 1999. After this, succeeding movie roles came year after year. She featured for a few seasons in the Television series ‘The District’ in the year 2000. Then she played the role of Jordan Cavanaugh in four episodes of ‘Crossing Jordan’ between year 2001 to 2004. She also featured in six episodes of the first season of Fox drama ‘The O.C’ in 2003. She appeared in a number of guest roles in other television series over the years like ‘My name is Earl’, CSI: NY, ‘Close to Home', and ‘Cold Case' etc.

She got her first leading role as California ‘Cali’ Ford in an independent film titled ‘A Place To Call Home’ in 2004. This was closely followed in 2005 by another leading role as Felicity Merriman in ‘Felicity: An American Girl Adventure’. Her steady climb towards stardom began in the popular ABC Family teen series ‘The Secret Life Of An American Teenager’. She played the role as Amy Juergen’s for the four seasons of the series which aired from the 1st of July 2008 to 3rd of June 2013.

Her big break came with her supporting role with veteran actor, George Clooney where she acted as his daughter, Alexandra King in the Golden Globe award winning movie, ‘The Descendants'. Apart from winning several awards and a Golden Globe nomination for her performance in this movie, she became a most sought after actress in the American movie industry. She climbed on this benchmark achievement with lead role in teenage romantic comedy ‘Spectacular Now' released in 2013. This was followed by a lead role in the fantasy drama ‘White Bird In Blizzard' in 2014.

Her high demand as a growing movie star landed her a role in the young adult trilogy as Beatrice Prior ‘Tris’ in the Divergent series. The Lionsgate Studio head, Eric Gate, had said Shailene Woodley was their obvious and coveted choice for the film. The first of the series premiered in 2014 recording huge success and returns. In the wake of the sweeping success of the Divergent movie, she starred in the Romantic movie ‘The Fault In Our Stars’. The movie was inspired by the life of a Sixteen year old who died of Thyroid cancer. The second installment of the ‘Divergent' trilogy ‘Insurgent' came in 2015 and the third ‘Allegiant’ in 2016.

The biographical film ‘Snowden' released in 2016 was the young actresses first departure from her usual teenage and young adult movies. Here she starred as the girlfriend of the rogue CIA employee who rocked the world when he released classified government information.

The twenty five year old movie star has won a plethora of nominations and awards in her years of acting.

From the Young Artist Award nomination for Best Performance in A TV movie for role as Felicity in ‘Felicity: An American Girl Adventure’ to a Golden Globe nomination.

The Golden Globe nomination came as a result of her impressive role in ‘Descendants’. She also won an Independent Spirit Award in 2012 and a 2012 MTV Award Breathrough Performance Award for the same film. She got an MTV Award for best female performance in 2015 for her role in the first installation of the Divergent series.

In her years as a professional actress, she has won thirty three awards and sixty one nominations. But not all of them follow the tide of her critical acclaim as she has even bagged an award for worst actress in the Razzies award for her role in much criticized ‘Allegiant’ movie.

Shailene Woodley is a confident young woman who is not shy to voice her thoughts and perspective. She is passionate about the environment and nature. She was once quoted in Hollywood reporters to have said: “my religion is Earth, Man and I believe in trees”.

She is very vocal about her political ideas and she is an activist. She was an ardent supporter of Bernie Sanders in the elections.

She had recently been arrested and charged in connection with organizing a protest against the Dakota access pipeline. She voiced support in and raised awareness about the plight of the Standing Rock Sioux Tribe. She protested the danger of a favorable federal Appeal Court ruling for the access pipeline saying it would corrupt their water and sacred places and affect the lives of millions.

She spoke often of relationship with her psychologist parents whose unusual method for bringing her up made her who she is today. She did not have only fond memories, however. Her parents made her hug her brother on the front lawn in the full view of neighbors after a fight between them and she recalled several times where she would complain about having her feeling hurt by someone, but rather than take her side, her parents would try to make her empathetic to the other person’s feelings. Although her parents are now divorced, she had grown up in a close knit, liberal family.

There is no actual record of romantic relationships as she has done well to keep her romantic life out of the spotlight. It has often been speculated that she had been involved with some of the men and one woman with whom she has starred in various movies and series. However, none of this was ever established as true. She expresses interest in being in a relationship. From her words on the matter, it is apparent that she is bit of a romantic. She has also been quoted say she is not feminist because she likes men.

When she was fifteen years old she was diagnosed with idiopathic scoliosis which is basically an abnormally shaped spine. She had to wear a chest to hips brace for two years. This cured her scoliosis and there is no other record of any serious health challenges since then.

Shailene Woodley’s demand as an actress is still at its peak. She is set to feature alongside Reese Witherspoon and Nicole Kidman in the new HBO dark comedy series ‘Big Little Lies’. This is set to begin airing on the 19th of February 2017.