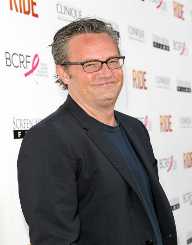 Mathew Perry was born on August 19th, in 1969 in Williamstown, Massachusetts. He is an American actor who became a star for his role as Chandler Bing in the TV series Friends. The TV series was aired for ten years, and it gave Perry a good platform for his recognition as a TV star. He is also a famous actor featuring in hit films such as The Ron Clark Story; Fools Rush In, 17 Again and many more.

Mathew Perry was born on August 19th, 1969 to John Bennett Perry and Suzanne Marie Morrison. His father was also an actor and a professional model. Perry’s mother worked as a journalist. Things did not work out well for Perry’s parents, and they parted ways before his first birthday. After this divorce, his mother wedded another journalist named Keith Morrison. With his father out of the picture, Mathew was raised by his mother, Morrison in Ottawa, Ontario. He schooled at Rockcliffe Park Public School before later joining Ashbury College.

Aside from Perry’s passion for acting, Mathew also showed interest in sports and particularly tennis. When he was 15 years old, he left his mother to go and spend time with his father. At this time, he was still schooling at his high school institution. His first film debut came during this period as he featured in A Night in the Life of Jimmy Reardon- 1988. Unluckily, this movie did not perform well and therefore had no significance in his film career.

Mathew Perry also played the role of Chazz Russell in an American sitcom that was aired in 1987 to 1988. This marked his first sitcom in his TV career. The show was aired for only one season with 21 episodes behind it. After the sitcom ended, Perry featured in two TV series as a guest for a few episodes. These were Growing Pains and Empty Nest. Both TV series was aired in 1989.

After completing his role in Parallel Lives-1994, the same year in September, Friends was premiered. This was an American sitcom that went on to be recognized as the best sitcoms of all time. Mathew Perry starred as the witty Chandler Bing for 236 episodes. The success of the TV show ensured that Perry and his co-stars became sensational celebrities. In 2002, his role bestowed him with an Emmy Award nomination. During this period, he lost the award to Ray Romano.

Apart from the success that Perry gained from his TV career, he was also working on his film career. He featured in movies such as Fools Rush In, Three to Tango, Birds of America, and 17 Again.

Mathew Perry is a dual citizenship individual as he is both an American and a Canadian citizen. He has had several relationships with Julia Roberts, Lauren Graham, and Lizzy Caplan.