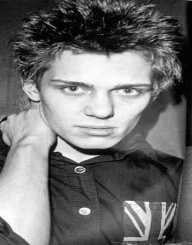 Paul Gustave Simonon is an English musician and painter. Born on December 15, 1955, he was a bassist of the disbanded punk rock band, The Clash. The band released a self-titled debut album in 1977 and followed it with many others. After it dissolved in 1986, Simonon continued his career in music and worked as a painter. In 2007, he was involved in the project The Good, the Bad & the Queen, alongside Simon Tong, Damon Albarn, and Tony Allen. He was on the Gorillaz album, Plastic Beach in 2010. In 2003, The Clash was inducted into the Rock and Roll Hall of Fame.

Paul Gustav Simonon was born on December 15, 1955, in Thornton Heath, Croydon to Gustave and Elaine Simonon. His father was an amateur artist and his mother a librarian. He grew up in Brixton and Ladbroke Grove. Simonon aspired to be an artist like his father growing up and therefore attended  Byam Shaw School of Art.

Paul Simonon went into music after meeting Mick Jones in 1976. Joe Strummer later joined them, and in six months’ time, they formed the Clash. Simonon took charge of the band's visuals including clothing and stage backdrops. Jones was the lead guitarist, and Simonon learned how to play the bass from Jones during the early days of the group. He was still not accustomed to playing the instrument during the group’s first recording. The group signed a £100,000 deal with CBS Record in January 1977.

They released a debut album, The Clash in April 1977, which shot them into stardom. They followed it by giving 3 am Enough Rope in 1978. The Clash released the double album London Calling in 1979, of which an image of Simonon smashing his faulty bass guitar during a performance in New York City in 1979 was adorned on the album’s front cover. It featured songs like Train in Vain and The Guns of Brixton. Many critics and fans of the group consider the album as the best the group ever made. The band also released other albums like Sandinista!, 1980, Combat Rock, 1982 and Cut the Crap in 1985.

The Clash disbanded in 1986, after which Paul Simonon founded the band Havana 3am. The group recorded a self-titled album released in 1991. The group disbanded afterwards. He collaborated with Bob Dylan on a session for Dylan’s album Down in the Groove in 1988.

He reunited with the Clash members Mike Jones on the album Plastic Beach by Gorillaz. Simonon also became an activist and campaigned against oil drilling in the Arctic of Greenland. In protest, he disguised himself as a cook and illegally boarded the Greenpeace vessel.

His identity discovered leading to his arrest and serving two weeks in Greenwich jail in 2011. Recounting the incident, Paul Simonon said, "They said if you don't get off...we're going to phone the authorities in Greenland and say you've hijacked the oil rig, and the police will come and arrest you. And that's pretty much what happened."

Aside from music, Paul Simonon is an artist, which is his first love before venturing into music. He has done several works and organised some gallery shows. He did the cover for the album Tighten Up, Vol 88, by Big Audio Dynamite. He also designed the cover for Herculean from the album, The Good, the Bad and the Queen.

Paul Simonon has married twice first to Tricia Ronane from 1990 to 2006. After their divorce, he married Serena Rees in 2007. Simonon has two children Claude and Louis Simonon.