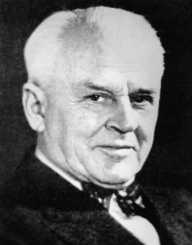 Robert Andrews Millikan was born on March 22nd, in 1868. He was an American physicist who won a Nobel Prize in physics in 1923. This was an award that he gained for measuring the elementary charge and his photoelectric effect research.

Robert Andrews Millikan was born on March 22nd, 1868 in Morrison, Illinois. He was the second born son of Reverend Silas Franklin Millikan and Mary Jane Andrews. Millikan had five other siblings. He enrolled at Maquoketa High School for his early education. Shortly after completing his high school education he took a job as a stenographer in one of the sawmills.

In 1887, he went to Oberlin College where he pursued a degree in Classics. Realizing the deep interest he had in physics, his teachers often gave him a chance to teach lower classes. After earning his bachelor’s degree, he went to the same institution for his master’s degree. He obtained his master’s degree in 1893. Two years later, in 1895, Millikan earned his physics doctorate at the Columbia University.

Robert Andrews Millikan professional career took off in 1896. He got a job at the University of Chicago as a physician assistant. He was working under the tutelage of A. A. Michelson, a physicist. Besides working as a physician assistant, he also wrote some books including A College Course in Physics -1898, Mechanics, Molecular Physics, and Heat -1902, and First Course in Physics – 1906.

A few years later, in 1907, Robert Andrews Millikan earned his promotion and became an associate professor. It did not take time before he was further promoted to a professor in 1910. This is a post he held for about a decade until 1921. Millikan continued with his research in physics. He particularly majored in molecular physics, electricity, and optics. In line with this, he made a huge name for himself after successfully measuring the elementary charge in 1910.

Soon, he focused his research more on the photoelectric effect. This is something that took him about three years from 1912 to 1915. During this research, he took some time to verify Albert Einstein’s photoelectric equation. In the year 1913, Millikan offered his services at the Western Electric as a research consultant. This was followed by his entry into the American Philosophical Society and the American Academy of Arts and Sciences as its member. In 1915, Millikan was chosen to join the National Academy of Science. Subsequently, in 1916, he was appointed to serve as the American Physical Society’s president. The continued to serve in this position until 1918.

In 1913, the U.S. National Academy of Sciences bestowed Millikan with Comstock Prize in Physics. Later in 1922, the Institute of Electrical and Electronics Engineers –IEEE awarded him with the IEEE Edison Medal. The following year, he obtained a Nobel Prize in physics mainly for measuring the elementary charge and his extensive research into photoelectric effect. Months later, the Royal Society of London bestowed him with the Hughes Medal. In 1937, he earned another award from the Franklin Institute. This was the Franklin Medal.

Robert Andrews Millikan passed away on December 19th, in 1953. He had suffered a heart attack leading to his death at the age of 85.