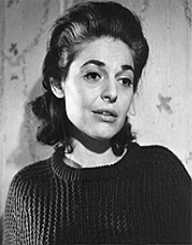 Anne Bancroft is a talented actress who has acted in different movies and went ahead in portraying as the teacher Annie Sullivan in the highly acclaimed film, The Miracle Worker. She was one of the most loved and respected film actresses. She was very beautiful, intelligent and highly talented becoming a woman that was envied by many womenfolk. She was the perfect example of the combination of beauty and brains.

She made it big in acting which she fell in love to as a young girl. Attending American Academy of Dramatic Arts, Anne Bancroft made the good fortune of studying under Lee Strasberg. She got her skills refined and use a screen name, Anne Marno. She has won many awards and has been part of different films.

Anne Bancroft was born to the first generation of Italian parents in New York. Her father was a Dress Pattern Maker while her mother was a telephone operator. She was known to have displayed interest in acting and was made to attend dancing and acting lessons since she became four. Anne Bancroft later went to Christopher Columbus High School where she graduated in 1948 before going to the American Academy of Dramatic Arts to obtain a qualification in Acting and Drama. Later on, she attended the American Film Institute’s Directing Workshop for women at the University of California.

Anne Bancroft tried breaking into films after adopting the screen name Anne Mano and appeared in numerous television shows. She was later selected for the movie, Don’t Bother to Knock in 1952 and changed her name to Anne Bancroft. She did get herself different film roles for the next few years, but her career did not give her the kind of impression she wanted. IN 1958, she had her Broadway debut in 1958 as Gittel Mosca in the play of Two for the Seesaw. Her performance was well appreciated and ventured into playing the lead role of Annie Sullivan in 1960. She played the role of Helen Keller who was a sight-impaired young teacher.

She got praised for her performance in her role as the teacher in The Miracle Worker. She later went on appearing in another play written by Bertolt Brecht who was a poet as well as a German dramatist. This play was considered to be the greatest in the history of the 20th century. In the Devils, Anne Bancroft was handed over a role as a nun who was obsessed with a priest in 1965, The Devils. This play ran for 63 performances.

By 1967, her career has becoming blossoming, and Anne Bancroft was called up for a role in 1967The Graduate where she played the role of an elegant older woman who tries to seduce a young college graduate who finally falls in love with her daughter. She went on acting in different careers and did act in the 1977 drama film, The Turning Point which was a huge success as it was nominated for several awards.

Anne Bancroft played a role in To Be or Not to Be which was produced by her husband, Mel Brooks. It was a simple remake of the 1942 film of the same name. By 1987, she got started in the British-American Drama, ’84 Charing Cross Road which was directed by David Jones and was based on James-Roose Evans. She kept on acting in films and became more active in television playing Kate Jerome in the television movie Broadway Bound in 1992. She also appeared in the Oldest Living Confederate Widow Tell All in 1994 before she suffered health problems.

Anne Bancroft is best known for her portrayal as an English Teacher that was appointed to teach the young Helen Keller in the biographical film, The Miracle Worker.

Anne Bancroft was honored with an Academy Award for the Best Actress in a Leading Role in 1962 for her portrayal of Annie Sullivan in the Miracle Worker. She also won a BAFTA Award for Best Foreign Actress as well as a National Society of Film Critics Award.

Anne Bancroft got married in 1953, but the marriage did not last long as the couple divorced in 1957 and she met the Comedian Mel Brook in 1961 with whom she tie a knot within 1964. The two were married until her death in  2005.