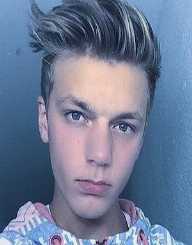 Frimzy was born on January 3, 1998, in California, United States of America.  His first name is Jose. He has one sister. He is an American Musical.ly star. He is best known by his fans as ‘ayefrimzy’. He is nineteen years old and he has made a name for himself through social media. He is a well known social media personality and internet sensation. He has gained visibility via social media hence paving a brilliant way for the beginning of his career.

Frimzy has really made it in the social media and most of his fans are girls who are driven crazy by his looks. He was ranked among the forty-nine most popular celebs on Musica.ly. His videos are viewed by more than one million viewers. Frimzy owns a business where he sells online products. His products range from mugs, phone covers, and T-shirts among other products. His products have his name engraved on them for the benefit of his fans. This page is known as ‘Truly Blessed’. Frimzy enjoys popularity and he likes that public eye being on him most of the time.

Frimzy is very cute and handsome and his looks drive ladies crazy. Most of his fans are ladies who have very huge crashes on him. Most of the ladies are teenagers who would die for him. Most of the ladies fantasize having him as a boyfriend. He is charming and optimistic by nature. He loves his fans very much as they contribute a lot to his success. He is social and adventurous. He loves exploring different things in his life and in the environment around him.

Many writers on Wattpad have also adopted him as a character in their works. He is considered very awesome by his fans and so they are other men of his age who are jealous about how his fans adore him. It is like Frimzy has set a benchmark that is used to evaluate other guys in the same category as him. So far in his career, he has not been involved in any major controversies. He loves the public eye but he does not love being involved in scandals.

Frimzy has tattoos almost all over his body and he has a pierced tongue. The markings on his body drive ladies crazy while they annoy other guys who do not like him. Most of the guys complain about the gestures and signs that Frimzy uses in his videos. Frimzy, however, does not care even when other guys bash him. He also shares his videos on YouTube where they are met with a lot of resistance from other male You Tubers.

Jose Frimzy comes from a family that entails his parents and his sister. Nothing much is known about his family even their names. He has however featured his sister in one of his videos that he posted on Instagram. Nothing much is known about his personal life like where he attends school or what he does during his free time. He is presently single and not attached to any lady emotionally.