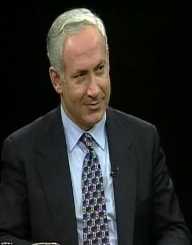 Benjamin Netanyahu was born in Tel Aviv, Israel to Benzoin Netanyahu and Tzila Segal. His father was a Jewish Historian Professor. He was born on October 21, 1949. Benjamin is one of 3 children. He had a brother named Iddo Netanyahu who is an Israeli playwright. He also had a brother who was the oldest of the three named Yoni.

He attended Henriette Szold Elementary School in Jerusalem. They moved to Philadelphia in the US in 1963. There he attended Cheltenham High School and graduated in 1967.

After graduation, Benjamin Netanyahu left to join the Israeli army. He trained as a combat soldier in the Israeli defense forces. He was shot in the shoulder when he helped rescue a hijacked jet plane at the Tel Aviv airport.

Then Benjamin Netanyahu returned to the US to continue his studies earning an SB Degree in Architecture in 1975. He also received an MS Degree from MIT Sloan School of Management in 1977. At this same time, he studied Political Science at Harvard University.

After completing his education, he got a job as a Management consultant at the Boston Consulting Group in Massachusetts from 1976 to 1978. He returned to Israel following the death of Yoni, his oldest brother. He was killed when an Air France airliner was hijacked to Uganda. Yoni was trying to free the hostages at the time. This was in 1978. While in Israel he began connecting with Israeli politicians.

Benjamin Netanyahu was selected as Deputy Chief of Mission at the Israeli Embassy in Washington DC by Moshe Arens. He held this post from 1982 to 1984. He then served as Israeli Ambassador to the United Nations in 1984. This post ended in 1988.

The Likud Party elected him as a member of the Knesset in 1988. During this time he served as deputy minister foreign affairs. Then in the 1996 Israeli legislative election, he was chosen as Likud’s candidate for Prime Minister.

In the 1999 election Ehud Barak defeated him after which he retired. In this same year, he became a consultant for BATM. He stayed in this position till 2001.

During this time to restore Israel’s economy, he implemented several economic reforms. Not only did he introduce changes in the banking system but he was in favor of more liberalized markets.

Benjamin Netanyahu married Miriam Weizmann in 1972. They had a daughter together named Noa. She divorced him when she found out he had an affair with Fleur Cates in 1978. In 1981 he married Fleur, and she converted to Judaism. But they were divorced in 1984. He married a flight attendant named Sara Ben-Artzi in 1991. They had two sons together named Avner and Yair. They are still together to this day.

Benjamin Netanyahu wrote and edited several books. The subjects of most of these books are on terrorism.