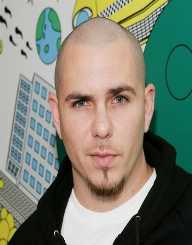 Pitbull is the name that fills the air every time Armando Christian Perez steps on the stage. Hailing from Miami, and embracing rapping as a way of life, he made it big time today to forget the earlier struggles of his life. As a toddler, he was mainly raised by his mother as she had separated with his father earlier. His parents were of Cuban roots and were emigrants in the U.S.A

Pitbull spent his teenage life with a foster family, and it was not as pleasant as any young person would wish to have. His mother worked hard to always remind him of his ancestry in Cuba, something that turned out for the better in his mature life as he heard of Jose Marti.

He went to a High school in South Miami and Coral Park, Miami, where he graduated. Immediately after school, he delved into music and sought to sharpen his rapping skills much to the amazement of his buddies. His peers, Cruz and Chirino, influenced him, and they moved to Miami Bass, and they tried out Crunk music.

In 2002, Pitbull was launched by the Crunk King himself, Lil John who turned the beast into him into a big star he had always thought of. He mentored him and made him a household name in Crunk music. Pitbull has done music in collaboration with great artists like; Jlo, Twista, 50 Cent, Eminem, NeYo, among others.

Pitbull's music breakthrough came in 2002 when Lil Jon gave him a nod and worked with him. Lil Jon, being accomplished rapper himself and adored by many as the King of Crunk gave him a lifeline and ushered him into stardom and his music universally accepted.

He recorded his first ever solo album, which was produced by Jonsin and Lil Jon in 2004. M.I.A.M.I and Nasty were hit in this album, as they ended topping charts.

In 2005, Pitbull came back reloaded with yet another of his track, Everybody Get Up, this time working alongside Pretty Ricky. This track sold millions of copies across the world and earned him accolades.

His father passed on in 2006 and Pitbull did 'El Mariel,' an album he dedicated to his late father. The chart-topping songs from this album included; Dime, Ay Chico, and Fuego. It was hard to lose a parent, but yes, it was a bitter reality that there was a gap between the two as his father was not there to see him growing up.

Pitbull’s third album titled, “The Boatlift,” landed with a bang in 2007. Trina dropped her mad lines like never before in the song, “Go, girl.” Lil Jon showed the ultimate energy in the song “The Anthem,” and Loyd Banks summed up the all successful album with his swagger in the song, 'Secret Admirer.' This album made trips all over the world attracting big concerts and live performances.

He continued churning out album and album every year with different artists and languages. His album, "Armando” in 2010, was his first ever in Spanish. This made him have a different niche as he traversed over to meet his increased fan base.

In his entire musical career, there was no instant hit like the single “Hey Baby” which Pitbull worked with T-Pain, in 2011. It attracted huge requests and airplay bringing in a lot of views. Music is really an unending journey, you better walk through it.