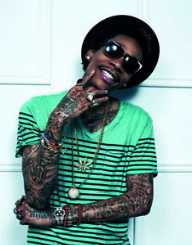 American rapper and actor Wiz Khalifa was born on the 8 September 1987.

Wiz Khalifa is a graduate of Taylor Allderdice High School in Pittsburgh.

His first album Show and Prove came out in 2006 and in 2007 Warner Bros signed him up. He Say Yeah became a Rhythmic Top 40 hit and also appeared on the Hot Rap Tracks chart in 2008 establishing his career.

After leaving Warner Bros., Wiz Khalifa made a second album Deal or No Deal (2009) and was then contracted to Atlantic Records. His first single for them was the hit Black and Yellow which reached number one on the Billboard Hot 100. His album Rolling Papers came out in early 2011 and was followed up by O.N.I.F.C. in late 2012. His following album, released in 2014, was Blacc Hollywood. His See You Again (2015) for the soundtrack of the film Furious 7 was a hit which spent 12 weeks on the Billboard Hot 100. His album Khalifa was released in February 2016 and featured a cameo appearance by his two-year-old son.

In 2016 Wiz Khalifa parted company with his long-term manage Benjy Grinberg amid accusations of an unfair deal.

Wiz Khalifa married Amber Rose in 2013, and they had a son together before divorcing in 2015.