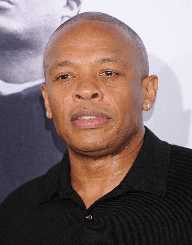 Dr. Dre was born on February 18, 1965. He is an American rapper and producer. He is the co-founder of Death Row Records and Aftermath Entertainment.

Dr. Dre was born Andre Romelle Young on February 18, 1965, in Compton in California. He was born to Theodore and Verna Young. At the age of seven, his parents separated. He attended numerous schools including Vanguard Junior High School, Fremont High School, Roosevelt Junior High School and Chester Adult School. He later developed an interest in music and decided to pursue a music career.

Dr. Dre started his career as a DJ at a local club known as ‘The Eve After Dark.’ In 1984, he became a member of a musical group known as ‘World Class Weckin’ Cru.’ The group released its first single ‘Surgery’ which was a hit. The single sold more than fifty thousand copies within Compton, California.

In 1986, Dr. Dre co-founded the group ‘Niggaz for Life’ (N.W.A) with Ice Cube, DJ Yella, and Eazy-E. The lyrics they used in their songs were harsh and overt as they illustrated the life in the streets. Their first studio album ‘Straight Outta Compton’ was a hit as it sold more than two million copies. In 1991, they released their second album ‘Efil4zaggin’. The group later disbanded. In the same year, he co-founded ‘Death Row Records’ in collaboration with Sue Knight. The following year Dr. Dre released his first single ‘Deep Cover.’

In 1999, Dr. Dre produced three songs on Eminem’s album ‘The Slim Shady LP.’ The album became a hit in the United States. He later released the album ‘2001’ which was a success and it returned gangsta rap. He produced songs and albums for artists such as Eminem among others. In 2001, he appointed R&B Singer Truth Hurts to his label. In 2003, he produced the 50 Cent’s single ‘Get Rich or Die Tryin’. He has also starred in movies. In 1996, he appeared in the film ‘Set it Off.’ He also appeared in films such as ‘Training Day’ and ‘The Wash.’

In 2008, Dr. Dre launched his brand of earphones known as ‘Beats by Dr. Dre.’ In 2014, his brand was taken over by Apple Inc for $3 billion. He made a joint donation of $70 million in collaboration with Jimmy Lovine to the University of California. The money was for the establishment of the Jimmy Lovine and Andre Young Academy for Arts, Technology and the Business of Innovation.

Dr. Dre has won six Grammy awards to date. He has won the MTV Best Rap Video Awards twice for his singles ‘Forget About Dr. Dre’ and ‘Keep the Heads Ringin’.

At the age of seventeen, Dr. Dre fathered his son Curtis Young. He got into a relationship with Jenita Porter with whom he has a son, Andre Young Junior. He also dated Michelle with who he has a son called Marcel. In 1996, he married Nicole Threatt with whom he had two children Truly and Truice. He has an estimated net worth of $810 million.