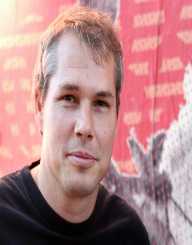 Shepard Fairey is an American who emerged from the skateboarding scene to become a graphic designer, street artist, illustrator, and activist. Born on February 15, 1970, Shepard Fairey is the founder of OBEY Clothing. His artistic works are included in the collections at The Smithsonian, the Los Angeles County Museum of Arts, the Victoria and Albert Museum in London the Museum of Contemporary Art San Diego, the National Portrait Gallery in Washington D.C and the Virginia Museum of Fine Arts in Richmond.

Shepard Fairey gained fame when he used images from the tabloid Weekly World News for his “Andre the Giant Has a Posse” sticker campaign during his days at the Rhode Island School of Design. During the 2008 presidential election, he designed the Hope campaign poster for Barack Obama, which also made him very famous. With this popularity, the Institute of Contemporary Art, Boston, named him as one of the influential street artists.

Shepard Fairey was born on February 15, 1970, in Charleston, South Carolina to Strait Fairey and Charlotte Fairey. His father was a doctor and his mother a realtor. He received education from Porter-Gaud High School. During this period he got involved in arts and started to place his drawings on T-shirts and skateboard in 1984. With his interest in artwork, he furthered his education at the Idyllwild Arts Academy in California and graduated in 1988. He then enrolled at the Rhode Island School of Design, where he graduated with a Bachelor of Fine Arts in Illustration in 1992.

While at the Rhode Island School Design he created the “Andre the Giant Has a Posse” sticker Campaign in 1989. This art became very popular and had since evolved into the Obey Giant campaign which other networks of collaborators have replicated. His aim for creating Obey Giant was to inspire and also cause people to start question how they relate to their surroundings. After his graduation, he founded the printing business, Alternate Graphic, in Province, Rhoda Island, which specialized in T-shirt and sticker silkscreens.

In 1994, he met American filmmaker Helen Stickler, a former mate at Rhode Island School of Design, who did a short documentary on Faire and his “Andre the Giant Pose.” It was premiered in 1995 at the New York Underground Film Festival and at the Sundance Film Festival two years later as well as being shown in more than 70 festivals and museums internationally. Shepard Fairey collaborated with Philip D Wolf and Dave Kinsey to set up the design studio BLK/MRKT Inc, which specialized in guerrilla marketing and "the development of high-impact marketing campaigns” from 1997 to 2003. They worked with famous brands like Hasbro, Pepsi, and Netscape. Post BLK/MRKT Inc, he partnered with his with wife Amanda Fairey to form the Studio Number One design in 2003.

Shepard Fairey along with artists like Mear One and Robbie Conal collaborated to create anti-Bush and anti-war posters for the campaign, "Be the Revolution" for the art collective "Post Gen." He also partnered with Roger Gaston to co-found the Swindle Magazine. Shepard Fairey embarked on the one-man show, "E Pluribus Venom," at the Jonathan LeVine Gallery in June 2007. It became very successful and made it to the front page of the New York Times art section. Fairey first exhibition, Supply & Demand was held the Institute of Contemporary Art in Boston in 2009. He displayed more than 250 works including screen prints, metal, and canvas, works on wood, screen-prints, rubylith illustration, stickers, collages and stencils among several others.  Even though the sticker has no definite meaning, it is to cause people to find some meaning in it.

In 2008, Shepard Fairey supported Barrack Obama’s presidential candidacy by creating a series of posters to support his campaign. This included the HOPE portrait, which was described by the New Yorker art critic, Peter Schjeldal, as “the most efficacious American political illustration since Uncle Sam Wants You.” He later created the Rock the Vote, because the Obama campaign team termed the Hope poster as perpetually illegal and declined to have any direct affiliations with it. However, Fairey later stated the campaign team agreed he features two additional words, "CHANGE" and "VOTE." In all, he distributed 500,000 posters and 300,000 stickers during the campaign period.

Shepard Fairey later disclosed that he received a letter of appreciation from Obama in February 2009, she his efforts during the campaign. The letter read; “I would like to thank you for using your talent in support of my campaign. The political messages involved in your work have encouraged Americans to believe they can change the status-quo. Your images have a profound effect on people, whether seen in a gallery or on a stop sign. I am privileged to be a part of your artwork and proud to have your support. I wish you continued success and creativity.– Barack Obama, February 22, 2008”. The Hope portrait was adopted by the U.S National Portrait Gallery in January 2009 and has since been made a permanent collection.

Shepard Fairey has been involved in several philanthropic works as well as activism and political issues. He has been donating to the Chiapas Relief Fund, Feeding America, the ACLU and the Art of Elysium since the early 2000s. After 2008, Obama campaign proceeds gained from the Hope posters were donated to the ACLU and Feeding America.

In 2007, he created The Obey Awareness Program managed by Obey Clothing to enhance his humanitarian efforts. Through this initiative, Shepard Fairey is able to causes by selling specially designed merchandise and donating the entire profit to an organization of choice. This program has benefitted organizations like Hope for Darfur, earthquake relief in Haiti, Feed America, 11th Hour Action and Dark Wave / Rising Sun for Japan relief among several others.

Shepard Fairey is married to Amanda Fairey. The two are blessed with two daughters Vivienne and Madeline. Aside from his artistic works; he is a performing DJ and works under the names DJ Diabetes and Emcee Insulin in many clubs. Fairey has diabetes.