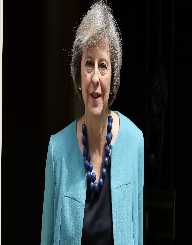 British Prime Minister Theresa May was born in Sussex, England on the 1 October 1956 to Herbert and Zaidee Brasier. She was born into a middle-class family, and her father Hubert was a Church of England vicar. May was raised mostly in Oxfordshire. The family lived in Wheatley, and as a young girl, Theresa May participated in village life. She took part in local drama productions and also worked in the local bakery on Saturdays. May’s father was killed in a motor accident in 1981 when she was twenty-five, and in 1982 her mother died of MS.

Theresa May’s primary school education took place in state schools as well as a short stint at a Catholic School in Begbroke. She then attended Holton Park Girls Grammar School in the village of Wheatley, the name of which changed to Wheatley Park Comprehensive School. After high school, May read Geography at St Hugh’s College, Oxford and graduated with a BA in 1977.

After graduation, Theresa May’s first position was working for the Bank of England (1977-1983), and from 1985-1997 Theresa May worked in the Association for Payment Clearing Services as Head of the European Affairs Unit and Senior Adviser on International Affairs.

Theresa May was elected as a councilor in Merton, South London and held this position for ten years and became the deputy leader. During her time as a councilor, May was Chairman of Education (1988-1990) and Deputy Group Leader and Housing Spokesman (1992-1994).

In the 1992 general election, Theresa May stood in the safe Labour seat of North West Durham which was won convincingly by Hilary Armstrong who later became Labour’s chief whip. May contested Barking in East London in a by-election in 1994 and lost, winning less than 2,000 seats. Success came in the 1997 general election when Theresa May ran as a Conservative candidate in the seat of Maidenhead, a new seat which had merged parts of Maidenhead, Windsor, and Wokingham. She won 49,8% of the vote as opposed to her second-placed opponent in the Liberal Democrats who took 26.3%.

Theresa May has served as a Member of Parliament for Maidenhead since 1997, holding various positions. From 1999 until 2010 she was in the Shadow Cabinet. In 2002 May became the first female Chairman of the Conservative. After the election, she was made Home Secretary, a position she held for six years. As Home Secretary, she was also a member of the National Security Council. During her tenure as Home Secretary, she became the second longest in that position in the past hundred years.

In July 2016, when David Cameron resigned after the Brexit result, Theresa May became Prime Minister. She surprised pundits by calling a snap election which was held in June 2017. After a strong grassroots campaign by the Labour Party led by Jeremy Corbyn, the Conservatives faced a hung parliament after the election left them without a majority.

Hobbies include cooking and bushwalking.

Theresa May met her future husband Philip May at Oxford University in 1976. They are said to have been introduced by Benazir Bhutto. Philip May was the president of the Oxford Union at the time. They married in 1980.