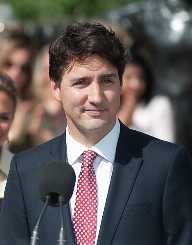 Justin Trudeau was first elected in 2008 during the federal election as he represented Montreal’s Papineau riding. He later served as the critics of Youth and Multiculturalism, citizenship and immigration as well as youth and amateur sport. He later sought the position of the Prime Minister in 2015. While campaigning for the position of the prime minister, he promised changes in areas like abortion among others.

Justin Trudeau was born on the 25th of December 1971 to Pierre Elliot Trudeau who was as at then the 15th Prime Minister of Canada and Magaret Trudeau. He was the oldest son of his father. He had his first degree in Literature from McGill University before having his Bachelor of Education from theUniversity of British Columbia. He then earned a degree from Universite de Montreal. He had taught French and Mathematics before he joined politics.

Justin Trudeau started his career as Liberal Party Nominee in the district of Papineau. It was there; he won massively against Deros and Giordano. He later went to the polling booth to win Vivian Barbot. He was a member of the official opposition before hearing the liberal party’s national convention. In October 2009, he was also appointed critic for multiculturalism and youth after being a critic of youth and immigration. Surprisingly, Trudeau is known not to have won the minds of the people but the minds of the poor. He was able to participate in 2013 Canadian Liver Foundation. He was later shown in this clip to have been attacked by the oppositions.

Justin Trudeau, however, became the leader of the Liberal Party upon the resignation of the Liberal Party Leader. He later launched his style in a bid to leading the party. He kept waxing stronger and stronger in the party until he contested and got sworn in by the Governor-General as the 23rdPrime Minister. He declared his administration as an administration of the poor. His priority was to reduce the taxes for middle class. Justin Trudeau later put forth an ethical statement in which he claimed that the government will be open and ethical. He later announced his responsibility to Canada as well as gave assurance about their rights. He was said to be the first member of 40th parliament to bring a private member’s motion. He brought the motion as National Voluntary Service Policy for Young People.

Justin Trudeau married Sophie who was a Canadian TV and a radio host on 28th of May, 2005. They had their marriage in a Catholic Ceremony at Montreal’s Sainte-Madeleine d’Outremont Church. They have three children who are Ella Grace, Xavier James, and Hadrian Gregoire. He later published his Journal, Common Ground in 2014 which was a story about the son of a prime minister.

Justin Trudeau was given a toast by the American president, Richard Nixon who predicted that he would be the future Canadian Prime Minister during the State Visit to Canada. He also loves pursuing challenging sports like snowboarding, bungee jumping among others. However, he started the Kokanee Glacier Alpine Campaign after his brother’s death in an avalanche. By 2005, he raised a fight against zinc mine due to the tendency of polluting the Nahanni River. He also took part in the Darfur crisis as well as the military conflict in Sudan.

In 2012, Justin Trudeau joined and participated in a charity boxing match to raise funds for cancer research. He is well known and respected for most of his achievements as a prime minister. His fight against the apartheid system cannot be underemphasized. He is also always remembered for fighting for the masses through the reduction of the taxes.