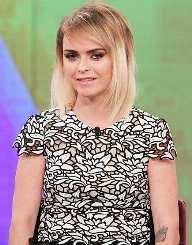 Actor Taryn Manning was born on the 6 November 1978 in Falls Church, Virginia in the United States to Sharon and Bill Manning. When she was an infant, her parents separated, and she was raised in Tucson, Arizona. When she as a preteen, the family relocated to California.

Taryn Manning was a pupil at Orange County School of the Arts in California.

Interested in acting from a young age, Taryn Manning’s debut role was in the teen drama Crazy/Beautiful (2001) where she played Maddy. Her next role in Hustle & Flow (2005) brought her to prominence. Manning’s portrayal of Nola, a prostitute, in Hustle & Flow, earned her a nomination for the Best Breakthrough Performance at the Washington D.C. Area Film Critics Association Awards.

Apart from acting, Taryn Manning is a singer, songwriter and fashion designer. She owns a record company, Little Vanilla Records and also has a clothing line, Born Uniqorn.

Taryn Manning was nominated for the 2005 Washington D.C. Critics Association: Best Breakthrough Performance for her portrayal of Nora in Hustle & Flow. In 2009 she won the Film Fashion Visionary Award at the Bel Air Film Festival.