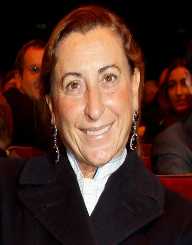 Miuccia Prada is an Italian Billionaire known for her prowess in fashion design of luxury products for both men and women. She is the director of Prada Fashion Design Company and also the founder of Miu Miu.

Miuccia Prada was born in Milan, Italy on 10th May 1949. She was the granddaughter of Mario Prada, the founder of Prada fashion line which initially specialized in steamer trunks, handbags, and high-end suitcases.

Her parents were Luisa Prada and Luigi Bianchi. She has two siblings who are both older than her. She went to Liceo Classico Berchet High School in Milan.

After completing her high school education, she enrolled in the University of Milan where she got her Ph.D. in political science.

For five years, Miuccia Prada became a mime. She joined the Communist Party where she was involved in women's rights.

She opted to join her Family Business. She was never considered as the most likely inheritor of the family business. The business had been stagnant for an extended period.

Prada and Patrizio Bertelli who was later to become her husband embarked on a journey to rejuvenate the company.

She started replacing old designs with the designs she had developed. Her first significant design was a line of black, woven nylon handbag in 1985.

After working closely with Bertelli, their company was slowly gaining popularity. They introduced new lines and went ahead to buy off some of their competitors.

In the year ended 2002, it was reported that Prada fashion company's annual revenue had cloaked more than $1.9 billion. Prada's stand out performance over the years has been attributed to the fearlessness in trying new styles and her originality in her styles.

Miuccia Prada is responsible for the company's retail strategy while her husband deals with the commercial side of the company. Prada's company has grown its products to shoes, apparel for both for both genders and fragrances.

Miuccia Prada is married to her business associate Patrizio Bertelli. The couple has two sons, one of them, Lorenzo Bertelli being a rally driver.

Miuccia Prada is the three times recipient of the VH1 Fashion Award for Women wear Designer of the Year in 1995, 1996 and 1998.

She was named by the Times Magazine as the top 100 most influential people in the world. In 2013, British Fashion Awards awarded her the International Designer of the Year.

Forbes named her in 2014 as the 75th most powerful women in the world and in 2016 she won the Glamour U.S. Women of the Year Award.