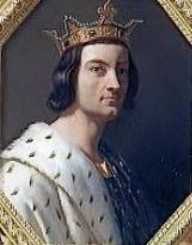 Philip III, the second son of King Saint Louis IX of France, was born on April 30, 1245, in Poissy, France. Queen consort of France, Margaret of Provence was his mother. Philip became the heir to the throne due to the premature demise of his elder brother Louis in 1260. In 1270, his father Louis IX died in Tunis, Africa, while participating in the Eighth Crusade. Philip was accompanying his father during the Eighth Crusade. He came back to France after the death of his father. In 1271, he was anointed King at Reims.

When his elder brother died in 1260, Philip III was a 15-year-old teenager of a very timid, soft and submissive character overshadowed by the strong personalities of his parents. His mother tried to keep him under her guidance. She made him promise by taking an oath by the name of Pope that he will remain under her tutelage until the age of 30. However, his father did not like the idea and requested Pope Urban IV to release Philip from his oath.

Accordingly, Pope released Philip from his oath on June 6, 1263. His father wanted to improve him by imparting the necessary education required to become a good King. Besides going through a faith-oriented education, Philip received some valuable advice from his father regarding the concept of impartiality and justice for all as the first and foremost duty of a King.

Philip III married Isabella of Aragon in 1262. The Archbishop of Rouen Eudes Rigaud solemnized their marriage in Clermont. The wedding was a direct diplomatic overture post the Treaty of Corbeil signed on March 11, 1258, between his father and James I of Aragon.

While Philip and his father remained engaged in the Eighth Crusade, an epidemic of dysentery hit the French army badly. The outbreak took its toll and accounted for the death of his brother John Tristan, the Count of Valois. Soon, his father also became a victim of the epidemic. Upon the unfortunate demise of his immediate family members, Philip III was proclaimed as the King of France in Tunis itself.

As said earlier, Philip was not a man of strong personality. He was of a pious and meek nature. However, he was a good rider and a brave soldier. Hence, the people of his kingdom nicknamed him as Philip the Bold.

After the death of King Louis IX during the Eighth Crusade, grief-stricken Philip III was not in the right frame of mind to command his army. He entrusted his Uncle Charles I of Naples the duty of negotiating with Muhammad I al-Mustansir, Hafsid Sultan of Tunis. A truce followed, and Philip could return to France to be sworn in as the King of France. A treaty was signed between the Kings of France, Navarre, and Sicily as well as the Barons on one side and the Caliph of Tunis on the other. The treaty signed on October 28, 1270, ensured truce between the parties concerned for the next ten years.

More deaths followed as a result of the outbreak of dysentery. In December 1270, brother-in-law of Philip III, King Theobald II of Navarre, became the next casualty of the epidemic followed by Isabella, Philip’s sister. Again in January 1271, his wife Isabella of Aragon fell while riding a horse in Calabria. She was pregnant with their fifth child at the time of the accident. Isabella died a painful death at Cosenza after miscarriage and a broken spine.

Philip III finally could reach Paris on May 21, 1271. He took oath as the King at Reims on August 15, 1271, after formally offering tribute to all the deceased family members including the funeral of his father.

The march of death continued even after his crowning. His uncle Alphonse, Count of Poitiers and Toulouse, died in Italy on August 21, 1271, while on his way back home from the crusade. Being childless, his uncle did not have any legitimate heir. Thus, the counties under the possession of Alphonso were inherited by Philip III.

He expanded the Kingdom of France by including these counties to the royal domain. Again, in 1284, one of his younger brothers, Peter, Count of Perche and Alençon, died without any surviving children. Philip III inherited the counties in his brother’s possession as well. In this way, France, under his reign, became a powerful monarchy with an extended royal domain.

Philip III could do little as an aggressor. He soon withdrew from a war declared by him to support the inheritance claim of his nephews in Castile. Pope Martin IV enticed him to attack Peter III of Aragon. Philip entered Roussillon leading his army as part of his favorable response to help the Sicilian Vespers in 1284. On September 7, 1285, the French army took control of the city of Girona.

However, to the utter misfortune of Philip, another outbreak of dysentery hit his army hard. He suffered the onslaught of the disease and finally succumbed to it. He died of dysentery on October 5, 1285, in Perpignan, the capital city of one of his allies, James II of Majorca. His son Philip IV became the next King of France as his successor.