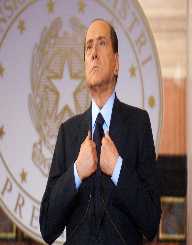 Silvio Berlusconi is an Italian media mogul, businessman, and politician; he is best known for his scandal-ridden tenures as prime minister of Italy.

Silvio Berlusconi was born in Milan, Italy on 29 September 1936. His parents were Luigi Berlusconi and Rosa Bossi. Berlusconi’s father worked for a bank. Berlusconi has two younger siblings, a sister named Maria and a brother named Paulo. Berlusconi’s family were comfortably middle class. He attended a Catholic secondary school. Berlusconi went to the UniversitàStatale to study law. He graduated in 1961 having specialized in the legal aspects of advertisements. Berlusconi was a great lover of music and while in university he played upright bass with a band. Berlusconi also sometimes performed as a singer on cruise liners. Berlusconi would retain his love of music into his other careers and would provide the anthems for his political party and football team. He has released two albums of classic Neapolitan songs.

Silvio Berlusconi became involved in construction in the 1960s, and his first major project was the construction of 4,000 apartments in the Italian town of Segrate. The project was named ‘Milan Two.’ With his success in construction, Berlusconi was able to expand in media and advertising. He founded Italy’s first private TV channel, named TeleMilano. The channel is today called Canale 5. Fininvest was founded by Berlusconi in 1978 to act as a holding company for his media empire. The company developed a network of local television stations, and its income streams are mired in secrecy. Berlusconi used his political connections to allow his TV networks to broadcast nationally. Some laws originally forbid Berlusconi’s channels from showing news or political broadcasts, but these were lifted in 1990.

The 1990s saw a collapse in support for a number of the leading Italian political parties as their leadership was embroiled in some corruption cases. This left the path open for new political parties to emerge. Berlusconi, already a prominent figure in Italy due to his wealth and media holdings, announced he was entering politics and formed his party, Forza Italia, in 1993. Berlusconi for election in 1994 and became a member of Italy’s lower house of parliament. His party won 21% of the national vote, the most of any party. Berlusconi formed a center-right alliance to take power and to keep out the communist parties. However, his alliance was contradictory one of his allies were the Northern League which wanted greater autonomy for the North of Italy, and his other allies were a neo-Fascist party. Berlusconi’s first reign as prime minister lasted little over a month. Forza Italia was then defeated in the 1996 general election.

In the 2001 election, Berlusconi was able to create a coalition that took over 45% of the vote in both houses of parliament and become prime minister for the second time. Berlusconi promised to simplify the Italian tax system, reduce crime and to raise the pension rate. Berlusconi was seen to have failed to honor these promises, however, in the 2006 election, his coalition only lost by .1% to a center-left coalition. The wafer-thin majority only lasted until 2008. Berlusconi contested the election by rebranding Forza Italia as the People of Freedom party. This was to present a united front with other centre-right parties who agreed to run under the People of Freedom banner. The grouping won the 2008 election and promised to tackle the economic malaise in Italy. Almost immediately though there was dissent from the other parties over the coalition’s lack of structure and Berlusconi’s leadership. The party split in two and Berlusconi’s side lost some local elections in 2011. Berlusconi’s majority in government had become razor thin and only won an October 2011 confidence vote by six votes. With Italy’s economy spiraling Berlusconi resigned in November of 2011.

Berlusconi was defeated and becoming increasingly embroiled in legal battles. Despite this, he announced he would be forming an opposition to the grand coalition that was ruling Italy during the political crisis. The party in alliance with the Northern League and others won 29% of the vote and Berlusconi after 19 years in the lower house of government was selected to the Senate. Berlusconi remains the leader of Forza Italia but has been barred from holding public office due to some corruption convictions. Berlusconi followed a right-wing pro-western path during his time in government. He often used anti-communist rhetoric while campaigning. Berlusconi was a supporter of both the invasion of Iraq and Afghanistan despite the lack of any UN mandate and support from many EU members. He also supported the expansion of the EU into Turkey. He is a close friend of Russian president Vladimir Putin and has been a vocal supporter of Russia.

Berlusconi also negotiated a five billion dollar compensation agreement with Libya in 2008. Berlusconi made a controversial ruling in the EluanaEnglaro right to die case. Englaro had been comatose for 17 years and had finally been declared dead by the courts, but Berlusconi prevented doctors from ending her life. Berlusconi also attempted to curb immigration into Italy, especially from North Africa. To tackle this Berlusconi negotiated a deal with Libyan dictator Gadhafi to prevent migrants reaching the Mediterranean.

Accusations throughout his career have dogged Silvio Berlusconi; they range from links to the mafia to using his media empire for political means. He has been tried on some charges and continues to be the subject of investigation. In 2013, he was sentenced to a year in prison for abuse of office. This was overturned on appeal. In 2013, Berlusconi took a plea deal on charges of bribery and was sentenced to twenty months in jail. However, a series of Italian legal loopholes meant he still has not served any of his sentence in prison. Berlusconi was also embroiled in some sex scandals. It was revealed that he hosted so-called ‘BungaBunga Parties’ which were attended by businessmen, politicians, and prostitutes.

In 2010, Berlusconi was accused of hiring prostitutes and underage girls. In 2013, he was found guilty of soliciting sex from an underage girl and sentenced to jail for seven years and banned from public office for life. A court of appeal overturned these rulings. Berlusconi was convicted of tax fraud in 2012 and sentenced to four years in prison and banned from public office for five years. He was allowed to serve his sentence, which was reduced to one year, working in a care home rather than prison. Berlusconi is still under investigation for bribery relating to witnesses from his other trials.

Silvio Berlusconi married Carla Elvira Dall’Oglio in 1965. They have two children together, Marina and Pier Silvio. In 1980, Berlusconi began an affair with Veronica Lario. He divorced his first wife in 1985 and married Lario in 1990. They have three children together, Barbara, Eleonora, and Luigi. Lario publicly criticised her husband’s philandering, and she filed for divorce in 2009. Berlusconi is the honorary president of the AC Milan football club which he has owned since the 1980s.