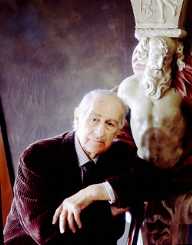 Gian Carlo Menotti was one of the most celebrated Italian-American Composer, Pianist, and librettist of the twentieth century who brought in contemporary charm into ti traditional operas. Gian Carlo Menotti had an impressive career and had, under his name, Seven Operas, one operatic ballet as well as two Pulitzer prizes.

His music was often characterized by expressive recitation, mind-boggling melody as well as transparent orchestration. His two most famous works include Christmas Opera and Amahl and the Night  Visitors’.

Gian Carlo Menotti was born on the7th day of July year 1911 in Caggiano-Viconago, Italy to Mr. Alfonso Menotti, a coffee merchant, and his wife Ines Menotti, a gifted musician.

Gian Carlo Menotti was the sixth born in a family of eight and started writing music early at the age of seven. By the time he was eleven, the young prodigy had already written two operas, i.e., The Little Mermaid and The Death of Pierrot.

Having completed his early education, Gian Carlo Menotti enrolled for formal music training at Milan Conservatory at the age of 14 (1923). After his father’s demise, his mother moved the family to Colombia in an attempt to salvage her late husband’s coffee business and in 1928; Gian Carlo Menotti was enrolled at Curtis Institute of Music, Philadelphia, where he studied composition under Rosario Scalero. It was in this school that he met Samuel Barber (as a fellow student) who later became his lifetime work partner.

In 1933, Gian Carlo Menotti graduated from Curtis Institute after which he began working on ‘Amelia al Ballo,’ his first mature opera which was received with much adulation in 1937.Apart from this, he only wrote other two operas in Italian, i.e., The Island God and The Last Savage. All the remaining were in English. The IslandGod was, however, the only failure of his early career.

Gian’s most successful works were those composed in the 1940s and 1950s. In May 1946, his Chamber Opera ‘The Medium’ was premiered, and during the following season, it had a run of 212 performances on the Broadway.

The Consul (1950) had a long Broadway run, won two awards and was considered by many people as being his masterpiece. In 1951, he produced a Christmas classic and one of his most famous works,’ Amahl and the Night Visitors for NBC-TV. In 1955, his Opera, The Saint of Bleecker Street won him a second Pulitzer Prize.

Later in1986, Gian Carlo Menotti reverted to Traditional Italian style with ‘Goya.’ Moreover, he wrote several choral works and several ballets some of which include The Death of Bishopof Brindisi (1963) and landscapes and Remembrances (1976), among others. His other operas include Telephone(1947), Maria Golovin (1958), Martin’s Lie (1964), Tamu Tamu (1973), The Hero (1976),

The Wedding (1988), The Singing Child (1993), among others. He also established the Festival of Two Worlds in Spoleto, Italy.

In 1946-1947, Gian Carlo Menotti received Guggenheim Award (Fellowship) before receiving both Pulitzer Prize in music and New York Drama Critics Award for The Consul (1950). Later in 1955, he was yet again honored with the Pulitzer Prize for The Saint of Bleecker Street.

Gian Carlo Menotti was also awarded the Kennedy Center Award for Lifetime Achievement in the Arts in 1984. Later in 1991, he was named the Musical America Musician of the year. The American Choral Directors Association also awarded him the Brock Commission. The Spoleto’s main theatre was also renamed as the ‘teatro Nuovo Gian Carlo Menotti’ in his honor in the year 2010.

During his time as a student at Curtis Institute of Music in Philadelphia, Gian Carlo Menotti met his best friend and lover Samuel Barber, with whom he studied composition. He also spent a lot of his time, during this time, in West Chester, Pennsylvania with the Barber family. Upon graduation, the two men bought a house in New York.

They named their house, “Capricorn” and lived in it together for more than 40 years. In 1974, Gian Carlo Menotti adopted Francis “Chip” Phelan, a young American figure skater and actor (he had known him as a child in the early 1960s).

On 1st February 2007, Gian Carlo Menotti died in a hospital in Monte Carlo, Monaco at the age of 95.