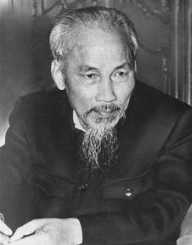 Former PM and President of Democratic Republic of Vietnam

Ho Chi Minh was born as Nguyen Sinh Cung on May 19, 1890, in Hoang Tru village. He had three siblings-sister and two brothers. Since he was five years old, Minh grew up with his father and studied with him. He later received formal education with a scholar VuongThyc Do. He learned Chinese writing, which was essential to obtain further education. He was also very adventurous and loved to fly kites and go fishing.

Ho Chi Minh's father was a Confucian teacher and later became an imperial magistrate in BinhKhe district. He was demoted after accusations were made of him abusing power. He was eligible to serve as a bureaucrat, but refused, since it meant helping the French. His father’s experiences exposed the young Minh to become a rebel.

Nevertheless, he received French education and attended lychee. His studies were threatened by his support of anti-tax demonstrations for the poor peasants. After finishing school, Nguyen hoped to move abroad.

After school, Ho Chi Minh went to Phan Thiet school, which he attended for six months and then traveled to Sai Gon. He took a job as a kitchen helper on the French ship Amirale de Latouche-Treville. In 1911, he reached France and tried out to be admitted at the French Colonial Administrative School. He was not accepted in the school, so Nguyen decided to continue traveling.

He continued to work on ships until 1917. During this time, he visited New York and Boston. He was working several odd jobs to support himself. In the United States, Nguyen met Korean nationalists, who helped to shape his political outlook.

Nguyen also stayed in various cities of United Kingdom, working mainly in kitchen jobs. In 1910, Nguyen found himself working in France when he began to take politics seriously. He was friends with French comrade of the Socialist Party, Marcel Cachin. Nguyen joined the Vietnamese nationalist group Nguyen Ai Quoc and began to fight for the rights of Vietnamese people.

Ho Chi Minh took significant steps to address the matter, even taking the issue to the Versailles Peace Talks. Despite his effort, his work did not succeed. Nevertheless, Nguyen's spirit didn’t break, and he soon became one of the leaders of the anti-colonial movement in Vietnam. He began writing articles and short stories and became the founding member of Parti Communiste Francais.

In 1923, Nguyen went to Moscow and enrolled at the Communist University of the Toilers of the East. The following year, he attended the Fifth Comintern Congress. In 1927, Nguyen started his journey towards Southeast Asia. He also traveled to Thailand and India and organized meetings of Vietnamese Communist Party of Vietnam in Hong Kong.

For his activity, Nguyen was arrested in 1931, which led to him falsely being announced dead the following year. In 1933, Nguyen was released from prison. After his release from prison, Nguyen went to Milan but then retreated to the Soviet Union. He then moved to China and began serving as an advisor for the Chinese Communist armed forces and changed his name to Ho Chi Minh.

In 1941, Ho Chi Minh started the Viet Minh independence movement with more than 10000 members. The organization achieved successful military actions against the French and Japanese occupation during World War II. In 1945, Minh made a deal that shaped the future of the country. In exchange for information to the allies, he was granted a line of communication. The members of his independence movement were trained by the United States Office of Strategic Services.

Following violence from rival parties and the French, Britain declared martial law. Viet Minh supporters announced a general strike. When massive amounts of Chinese troops entered the country, Minh was forced to dissolve the Communist Party and demanded an election. When the Chinese left the country, Ho Chi Minh signed an agreement with French, allowing Vietnam to be recognized as an autonomous state in the Indochinese Federation and the French Union.

However, France had no intention to give Vietnam the status of an autonomous state. This led to the declaration of war against the French in 1946. The war extended for several years, and a lot of infrastructure of the country was destroyed. When the Soviet Union and China recognized Minh’s government, Chinese troops were sent in to help Vietnam, and French forces were crushed.

The Democratic Republic of Vietnam moved to Hanoi and formed the North Vietnam government, while anti-communist and pro-democracy forces led the South. The United States proposed a plan for unification of the party, but communist-led North Vietnam refused it. The people of North were not allowed to speak against the government, and many were imprisoned or executed.

Ho Chi Minh introduced programs to exterminate class enemies of the government. During this program, an estimated 500,000 people lost their lives. In 1959, North Vietnam invaded Laos, and Minh appointed Le Duan as the acting leader of the party.

In 1963, negotiations with South Vietnam took place, but they were not successful. North Vietnam was facing more danger from the South since the US sent in more troops. In 1968, U.S. and Vietnam began discussion on ending the war. The outcome of the Vietnam war was still in question, when Minh died at his home, aged 79.

Ho Chi Minh was also a writer, journalist, and polyglot. One of his poetry chronicles- Poems from the Prison Diary is the Vietnam National Treasure. After gaining independence from France, Minh extensively worked to eliminate illiteracy. Minh was able to speak, read and write in French, English, Russian, Cantonese, and Mandarin, as well as Vietnamese.

His hobbies included reading, gardening, and feeding fish. During his final years, Minh remained in Hanoi. His health was deteriorating, and he had diabetes. He died at his home from heart failure. His death was not reported to the public for 48 hours, since he died on the anniversary of the founding of the Democratic Republic of Vietnam, on 2 September.