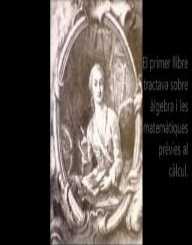 Maria Gaetana Agnesi was born on the 16 May 1718 in Milan, Italy. Her father had twenty-one children from three different wives. She was born into a wealthy family and at a young age displayed a talent for languages including Latin and Greek. In her teenage years, she became interested in mathematics.

In 1738 Maria Gaetana Agnesi published Propositiones Philosophicae which consisted of essays on philosophy and natural science that she wrote based on conversations she had had with the intellectuals she had met in her family home. She argued that women should have access to education.

She published a second book in 1748 entitled Analytical Institutions which concerned differential and integral calculus. This work became a standard mathematical textbook and was translated into various languages. It was in this work that she wrote about the curve today known as the Witch of Agnesi.

Maria Gaetana Agnesi was elected to the Bologna Academy of Sciences and was awarded a diploma. She also became a faculty member but did not take up the appointment as she was already deeply involved with charity work which would occupy her time for the rest of her life. Besides her activities in helping the poor, sick and elderly she also studied theology.

Her later years were spent living in the Opera Pia Trivulzio, a hospice run by the Blue Nuns in Milan taking care of the sick and dying. She eventually became a Blue Nun.

Maria Gaetana Agnesi died on the 9 January 1799 in Milan, Italy. She was eighty-one years of age.