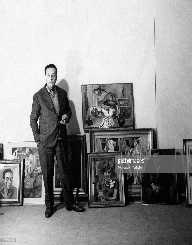 Renato Guttuso was an Italian painter born in December 26th, 1912. He rose to be among the best and respected painters in Italy at the time. He took a keen interest in painting from a young age. He was only thirteen years old when he began his career in painting. He is best remembered for his work Crucifixion in 1941 and La Vucciria in 1974. He participated in the Communist Party which had been banned in his country Italy. He was also a fierce anti-Fascist while he was alive. He was honored with the World Council of Peace Prize in 1950. He also won himself the 1972 Lenin Piece Prize.

Renato Guttuso was born in December 26th, 1912. His place of birth was in Bagheria in Italy. He was the son to Gioacchino Guttuso and Giuseppina d’Amico. His father earned a living as a land surveyor. He also did painting during his spare time.

Guttuso developed his interest in painting from a young age. Most of his paintings as a teenager were inspired by the environment he lived in. 1825 marked the beginning of his successful career in painting.

Renato Guttuso acquired his education in Palermo. After his high school education, he joined the University of Palermo. At the university, he took lessons in fine arts. During this time, he was much inspired by renowned painters especially Vincent Van Gogh. He was later acquitted with painter Pippo Rizzo who helped him further develop his painting skills.

Renato Guttuso exhibited some of his professional work in an exhibition in Rome in 1931. This is an exhibition that is held after every four years. During the event, he met with other Sicilian artists upon which they formed a group. He later shared a studio with Lia Pasqualino a fellow painter and two sculptors. Together they became ‘The Group of Four.’

In 1932, Renato Guttuso co-hosted an exhibition held in at a gallery which took place in Milan. The exhibition was quite a success for the people of the city took great interest. He later worked at the Borghese Gallery situated in Rome as a side hustle from painting. Painting alone proved to pose financial challenges to Guttuso. Initially, he served as a picture restorer at the gallery before joining another galley situated in Perugia.

Renato Guttuso became a member of The Corrente movement later in his career. For three years beginning 1935, Guttuso lived in Milan. During his stay there, he joined the Corrente di Vita. This was a cultural group. He also came up with his work Fucilazione in Campagna.

The year 1938 marked a career turning point for Renato Guttuso. This was after he left Milan in 1938 and settled in Rome. It was then that he worked with some top painters like Corrado Cagli and Mario Mafai. Meanwhile, he also developed some of his best work ever in his career including Crocifissione. He also became a great advocate against anti-Fascist ideologies. This led to him joining the Communist Party.

In 1945 soon after the end of World War II, he came up with the painting New Arts Front. This was followed by Workers Resting. He came up with more great paintings throughout the 1970s. Among his best work during this time was the painting La Vuccina.

In 1956, Renato Guttuso tied the knot with Mimise Dotti but never had children.

Renato Guttuso took his last breath on January 18th, 1987 after battling with lung cancer. He died in Rome. He was 75 years old at the time of his death.