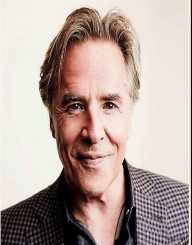 Don Johnson, also known as Donald Johnson, is a very popular and highly known American Actor, director, singer as well as a producer. He was known to have wished to become a bowler before getting himself involved in theater. He got his first major role at a very age of twenty but was able to establish himself after a long period. He was well known most likely due to his role in Miami Vice. He was invited to play roles in so many well-known films and series. He has to his credit titles and has released three music albums. He has no luck with women as he has experienced a lot of divorces and separations.

Don Johnson was born in Flat Creek, Missouri to Wayne Fred Johson and Eva Johnson on December 15, 1949. He father was a farmer while his mother was a beautician. He, however, moved to Wichita in Kansas where he had his high school at South High where he performed some plays. He, however, traveled to San Francisco to study drama.

His first major work was in 1969 when Don Johnson was still twenty years old. He was meant to play a lead role in a Los Angeles production, Fortune, and Men’s Eyes. He later got the attention of many film directors including Leonard J Horn who gave him a role in the Magic Garden of Stanley Sweetheart. He failed to make an impact there. As at that time, his major and highly notable works were Zachariah, The Harrad Experiment and A Boy and His Dog among others. He won acclaim, as well as an award for this last mentioned film but this did not affect his career.

He, however, made his first real break with his work Miami Vice; there he worked as an undercover detective. This film catapulted him into the limelight, and he got many job endorsements. He starred in some films which include Hot Spot, Paradise, Harley Davidson, Born Yesterday among others. He also got a role in a popular television series Ben Quick which established his popularity in the television world.

He kept on acting but had to wait till 1996 after his last film to act some great television series. He got himself to act in Nash Bridges, a television police drama. He acted under the name Nash Bridges as an Inspector of San Francisco Police Department. He appeared in all the drama’s episodes. He later went legal by acting like an alcoholic lawyer in a series that was cut short.

Apart from acting, Don Johnson is also a good musician. He has some single hits to his name, and these hits includeHeartbeat, Heartache Away, Voice on A Hotline, Tell It Like it Is among others. He is also known to have co-written a lot of songs which have become a hit too. The works include Blind Love, Can’t Take it with You among others. Some of the albums he has to his credit include Heartbeat, Let It Roll and Essential.

His first major work and the work that brought him the first award was A Boy and His Dog. Miami Vice was also his major work as well as his first major television series. This movie established him among the mainstream actors. He also won a Golden Globe Award for it.

Don Johnson is not that successful in marriage as he is in his career. He is known to have married many times and chose not to disclose the names of his first two wives. However, the wives were known to have been married to him in the late 1960s, but the marriages were short-lived. Later, he was found dating a girl of fourteen years whom he later lived with when she clocked fifteen. He later married her in 1976, but the marriage ended within six months.

He later married Pamela and then Patti with whom he fathered a child. He then developed a sexual relationship with Barbra Streisand which did not last long. He reconciled with Melanie and divorced her again in 1996 before he married his present wife in 1999.