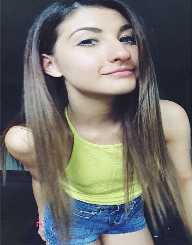 Megan Nicole DeAngelis was born on May 15th, 1995 in Toronto, Canada. When she was still a child, her family moved to Germany. She studied at the University of Central Florida until DeAngelis decided to drop out of college to pursue a career as a professional YouTuber.

Her parents are both engineers. DeAngelis also has a twin sister. For some time, she was dating a fellow YouTuber, Alex Aiono, but the couple broke up, and her current relationship status is not known.

Megan has created one of the most popular YouTube channels, MayBaby with over 5.5 million subscribers. She used to watch beauty, make-up and fashion tutorials herself until she joined YouTube in 2008. At the time, she was a competitive cheerleader, and she made her first video of doing a back handspring. Her video quickly got around, and within a week, Megan got over 500 subscribers, which was a big motivation to continue improving her account.
Initially, DeAngelis created the videos for herself. After a visit to Los Angeles, DeAngelis quickly learned about the YouTube community there and decided to drop out of college to pursue a career as a professional YouTuber. She moved to Los Angeles and began working on her channel about life-hacks, decorating ideas and comedy sketches. Soon after she was hired by the Awesomeness TV and started designing for their clothing line.