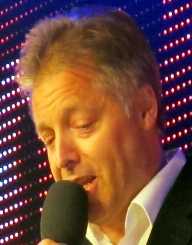 Trevor Neil Brookes was born on April 24, 1959, in Stoke-on-Trent, Staffordshire, England. He later started going by the nickname Bruno, which he is best known for now. His parents are Sheila and Clive Brookes.

As a teenager, Bruno Brookes studied at both Bradwell and Seabridge schools. It was while at school that he became interested in deejaying. He first began deejaying with a local youth club. He practiced this skill while also working simple jobs, like working at a car wash, to earn money to buy more deejaying supplies. Once he finally had what he needed, he sent in an audition tape to BBC Radio Stoke. His audition won over the radio station and earned him his first radio job.

Bruno Brookes worked at BBC Stroke for several years. His skills were so exceptional that he was recruited by BBC Radio 1 only three years after he started working as a radio host. He first worked as a stand-in presenter, but later became the teatime show host when Peter Powell, another BBC Radio 1 host, left the post.

Beginning in 1986, Bruno Brookes began presenting the Top 40 pop hits. He continued this until 1990. In 1989, he began co-hosting the weekend breakfast show on the same station with Liz Kershaw. He also sometimes worked on the weekday breakfast show with Simon Mayo. In 1992, he resumed his post as the presenter of the Top 40. In a crazy mix-up, Bruno Brookes played a song that had the word f**k in it several times. The incident earned several complaint calls. After the incident, Bruno Brookes was suspended from the show for weeks but was not fired, as it was an accident. However, this post and his career with BBC Radio 1 ended in 1995, as the radio stations wanted some new voices on the air.

Bruno Brookes returned for one show in 2007, co-hosted with JK and Joel. He was then off the radio from then on.

While still working with BBC Radio 1, Bruno Brookes appeared as himself in several television shows, mostly acting in cameos instead of having an actual role. In most things he appeared in, he simply played himself. Some of the shows he appeared on in the 1980’s and 1990’s are Wogan, Juke Box Jury, Blankety Blank, and Surprise Surprise!

Apart from bit roles, Bruno Brookes also hosted several game shows in the 1980’s and 1990’s. These shows include the following: Beat the Teacher and Top of the Pops.

One of Brookes’s had a role in the documentary, Blood on the Carpet: Walking with Disc Jockeys. This documentary aired in 2001, and it was one of the first things he did after leaving his post on the radio. He had previously been in one documentary that was not as popular, Top Ten, which aired in 2000.

The next thing he acted in was not until 2007, which was another documentary titled The Real Extras. Since then, Brookes has appeared in several more documentaries, including the following: Pop Charts Britannia: 60 Years of the Top 10, Watchdog, and How to Make a Number One Record.

Bruno Brookes was first married to Debbie Brooker in 1994. However, the couple has since then divorced.