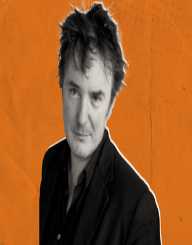 Dylan Moran was a pupil at St Patrick’s Classical College, leaving school at 16.

Dylan Moran’s success at the Edinburgh Festival led to invitations to appear at international festivals and at the same time he began touring in the UK, taking his Gurgling for Money show on the road. He also started working in television and appeared in How Do You Want Me (1998) on the BBC and in Black Books (2000), a Channel Four production in which he appeared alongside fellow comedian Bill Bailey. Moran also toured with his shows Ready, Steady, Cough, Dylan Moran: Monster and Monster II. He has traveled North America, Europe, Australia, New Zealand, Scandinavia, the Baltic States, Russia, Estonia and South Africa.

Dylan Moran won the So You Think You’re Funny? A prize at the Edinburgh Festival in 1993 and 1996 he won the Perrier Award. Moran also won the BAFTA Award for Best Situation Comedy on two occasions, both times for Black Books.

Dylan Moran keeps his private life extremely private. He married Elaine in 1997, and the couple has two children.