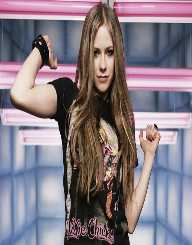 Avril Lavigne is a Canadian singer and is best known for her songs Sk8erBoi and Complicated.

Avril Lavigne was born on 27 September 1984 in Belleville, Canada. Her parents are Jean Claude and Judy Lavigne. Lavigne has two siblings, a brother Matthew and a sister Michelle. Her family were French-Canadian and were members of the Baptist faith. Lavigne began singing at church, and her parents recognized she was talented from an early age.

Avril’s parents supported her music and bought her instruments and built a studio in the family home basement. Lavigne would perform at county fairs and loved country music; she would perform Shania Twain and Dixie Chicks songs. In 1999, Lavigne won a radio contest to perform onstage with Shania Twain. Lavigne and Twain performed at the Corel Centre in front of 20,000 people.

The performance with Shania Twain caught the attention of folksinger Stephen Medd. He invited Avril Lavigne to contribute to his 1999 album, Quinte Spirit. Lavigne was signed up by manager Cliff Fabri in 1999 and was signed to a contract in 2000 by Arista Records. The contract was worth 1.25 million dollars and was for two albums.

Lavigne dropped out of school to focus on her music. Lavigne worked on her debut album for nearly two years and collaborated with some writers. Let Go, was released in 2002. The album would go on to sell over twenty million records.

Lavigne recorded the album in L.A with the production team The Matrix. It reached number one in Australia, Argentina, Columbia, Canada, New Zealand and the U.K. It also reached number 2 in America and Germany. The album featured the single Complicated, which sold over a million copies and reached the top five across the globe and was number one in Ireland, France, Australia, Canada, and Brazil.

Avril Lavigne was only the second artist to have three singles reach the top ten from a debut album. A second album, Under My Skin, was released in 2004. The album reached number one in Australia, Austria, Canada, Germany, Japan, Mexico, UK, and the USA. The album has sold eighteen million records.

Four singles were released from the album, Don’t Tell Me, My Happy Ending, Nobody’s Home and Fall to Pieces. None of the singles enjoyed the same success as her debut releases, but, My Happy Ending, did reach the top ten in most countries and was certified platinum in Brazil and America.

Avril Lavigne also wrote the song Breakaway which was recorded by Kelly Clarkson. Lavigne recorded the theme song for the 2004 SpongeBob Square Pant’s Movie. She also wrote and recorded Keep Holding On for the 2006 movie Eragon. Lavigne performed at the closing ceremony for the 2006 Winter Olympics, which were held in Turin.

A third studio album, The Best Damn Thing, was released in 2007. The album debuted at number one in America and reached number one across much of the world. The album has sold over eight million copies. The lead single from the album, Girlfriend, outsold the album with more than 10 million copies bought.

The single also reached number one across the world. The other singles from the album, When You’re Gone, Hot and The Best Damned Thing, did not enjoy the same commercial success, but all charted well. Lavigne recorded the soundtrack for Disney’s Tim Burton directed Alice in Wonderland. She again performed at the closing ceremony of the Winter Olympic Games, this time in Vancouver, Canada.

Rihanna’s 2010 hit, Cheers (I’ll Drink to That), sampled Lavigne’s I’m With You track and Lavigne appeared in the song’s video. A fourth studio album, Goodbye Lullaby was released in 2010. It did reach the same heights as her previous works but did reach the top five in fifteen countries. The album has sold two million units and featured the singles, What the Hell, Smile and Wish You Were Here.

Goodbye Lullaby’s dark tone was contrasted by Lavigne’s self-titled fifth studio album which was released in 2013. It was very successful in Asia; it reached number one in China and number two in Japan and South Korea. It was less well received in the rest of the world; it reached number 14 in the UK and number 5 in America.

Avril Lavigne also has some minor acting roles. She first appeared on television as herself in an episode of Sabrina, the Teenage Witch. Lavigne provided the voice of Heather a Virginia opossum in the animated film Over the Hedge. She has also appeared in the films, The Flock, and Fast Food Nation, the former appearing alongside Richard Gere.

Lavigne launched a clothing line, Abbey Dawn, in 2008 for producers Kohl's. The line was aimed at children and teenagers. The line built on Lavigne’s skater style and brand. She launched a fragrance, Black Star, in 2009. Procter & Gamble produced black Star. A year later a second fragrance, Forbidden Rose, was launched. 2011 saw a third fragrance, Wild Rose, launched by Lavigne.

Avril Lavigne became a French citizen in 2011. She moved to France to learn the French language. Lavigne married Sum 41 frontman Deryck Whibley in 2009. The couple divorced a year later. She enjoyed a long-term relationship with Brody Jenner and got his name tattooed on her body, but the relationship ended in 2012. Lavigne then dated Nickleback frontman, Chad Kroeger. They married in 2013, but have since separated.

Avril Lavigne revealed that she suffered from Lyme’s Disease which had left her bedridden in 2015. Lavigne also suffered bouts of depression during her illness.

Avril Lavigne has been nominated for six Grammy Awards but has never won a Grammy. She has also received nominations for MTV and Brit music awards. She has sold an estimated ninety million records worldwide.