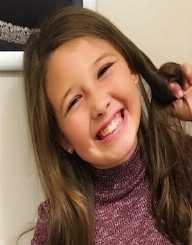 Jillian McLaughlin best known as Jillian Babyteeth4 is a social media phenomenon, YouTuber, and a vlogger. Born on September 21, 2005, she came to prominence as the host of Kid CandyReview, which is currently the most-viewed candy review show in the world. Jillian Babyteeth4  co-hosted the show with her younger sister Adelaide McLaughlin is also known as Addie. The two have since become a social media sensational and has taken YouTube and other sites by storm. They also have their personal website.

On their YouTube channels, Babyteeth and Babyteeth More, they post numerous candy review videos in which they assess various candies for best flavors. It also features videos of Do It Yourself candy project and toy unboxing segments. Their father, Bob is the brain behind Babyteeth4 and serves as the director and editor of their videos. Aside from being social media star Julian has feathered in films produced by her father and owes the animated series Overly Sensitive Zombie Girl.

Jillian Babyteeth4 was born on September 21, 2005, in Pennsylvania, the United States to Bob and Tommie McLaughlin. She is the elder sister Adelaide McLaughlin also known as Addie. The family currently lives in Braddock, Pennsylvania. Growing up her parents took her through she was involved in his father’s production of babyteeth4. Bob is the founder, director, and editor while Tommie takes Julian and her sister through voice acting.

Jillian Babyteeth4 presence on social media spans from her childhood when her dad invited people to her first birthday by posting a video of her on YouTube.She was soon featured in her father’s videos where he retells fairytale stories for his YouTube channel. One such video is Jillian Babyteeth4 and Beanstalk posted in 2010. The video produced considerable likes, which edged Bob to produce more. Bob then started producing his own scripted videos including Fast Cars and Bad Kids for the channel in 2010. In the videos, Jillian Babyteeth4 and her kid sister Addie picks his car keys and set for a high-speed joyride. The videos became very popular; generating over 170 million views and is up until now one of the most popular videos ever posted on the channel.

After that successful production, Bob was motivated to produce more which led to the video Too Many Addies’. In the video, Jillian Babyteeth4 an inventor creates the duplication machine that Addie accidentally uses to create her replicates while playing with it. The video just like the others was well received by fans surging the popularity of Jillian and Addie. Bob has since created other videos like Scallywags and Kids in Space. Their channel now has over 1.2 million subscribers and millions of views. The duo in 2016 got another channel Babyteeth More for their daily vlogs. They use the channel to post unscripted vlogs of their daily activities. Jillian Babyteeth4 i and Addie have been involved in the production process of their videos. This is to ensure they act naturally and realistically and to make them comfortable when acting.