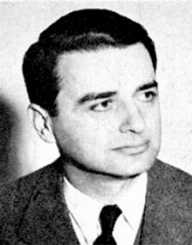 Edwin H. Land was born on May 7, 1909. He was an American Scientist. From a young age, he began studying optics and the polarization of light. He is known for his development of the first instant camera. He collaborated with the military during the war to help improve reconnaissance techniques and long distance photography. After his retirement, his formed his research institution. He died on March 1, 1991.

In 1926, Edwin H. Land enrolled at Harvard University where he studied chemistry. He dropped out of the university after two months to pursue a business career in polarized light. His love for optics drove him to begin studying optics at the New York Public Library. He was also conducting experiments in a basement laboratory in Columbia University. In 1929, he went back to Harvard where he was given his laboratory. He was determined to make better a sheet polarizer for industrial production processes.

In 1932, he met George Wheelwright with whom Edwin H. Land became a  business partner. His company began to develop polarizing filters for sunglasses and so Wall Street investors agreed to assist in financing the company. In 1937, the company ‘Land-Wheeliwright Laboratories’ changed its name to ‘Polaroid Corporation’. By 1942, the company had developed colour animation for jukeboxes, the ability to dim light coming through a window and 3-D glasses for movies. During World War II, Edwin worked with the American military.

Edwin H. Land worked with them to develop and improve optics connected to reconnaissance which enabled the government to take long distance photos. In 1948, he invented instant photography which was available in sepia tones. His invention was known as the ‘Land Camera’. Two years later the company released the first ever instant camera that used black and white film.

In 1957, Edwin H. Land was awarded an honorary doctorate by Harvard University. He was also appointed as a member of the President’s Science Advisory Committee. In 1961, he became a member of the President’s Foreign Intelligence Advisory Board. In 1963, he released the first instant camera that used colour film. In 1968, he supported the civil rights movement by hiring people from minority groups in his company. In 1980, he resigned as the chairman of Polaroid Corporation. He went ahead to establish the Rowland Institute for Science in order to continue his research on optics.

In 1929, Edwin H. Land married Helen Terre Maislen with whom he had two children. He died on March 1, 1991; in Cambridge, Massachusetts of natural causes. He died at the age of eighty one.