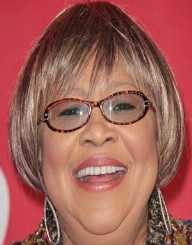 Mavis Staples is the famous frontwoman of the band American gospel-singing band called the Staples Singer. Staples is also a committed civil rights activist and had the opportunity to perform for a show of which among the attendees is Dr. Martin Luther King Jr. She won a Grammy Award for Best Americana Album with her work on the album You Are Not Alone in 2010.

Staples was married in 1964 to Spencer Leak but ended up in a divorce when Leak demanded that she give up her music and stay at home instead. She revealed on later interviews that she received a marriage proposal from the famous Bob Dylan. Staples and Dylan used to date, but she turned down the invitation. Dylan later addressed her as his lost love.

The Daughter of a Music-Loving Laborer

Mavis Staples was born in Chicago, Illinois on July 10, 1939. The youngest of four bunch, her parents were Roebuck "Pops" Staples and Oceola Staples.

Pops was also a known musician in his own time, and before Staples' birth in 1939, he moved to Chicago and found employment at a factory for meatpacking. Pops continued with his music and proceeded to play with the Trumpet Jubilees, a band of the quartet. Growing tired of the band's lack of enthusiasm, he left the band and formed a new one consisting of his immediate family members.


The Staple Singers is Born

Mavis Staples was eight years old when her father formally introduced her to music. She remembered her father assigning different positions to the family, and she was to take the part of the vocalist. They made their debut at a local Chicago church when Staples was only ten years old. Their performance ended as a stunner which led them to perform from one show to another. The audience was in awe especially to Staple who has a voice that proved too mature and too big for her age and appearance but won the hearts of the public. She credits the side of her mother for the God-given talent which she used greatly.  From there, they made history as of the greatest gospel singers in America.

The Staple Singers did not formally go on tour until Staples graduated in 1957 from high school. The same year, they signed a deal with a record label named Vee-Jay Records and produced the hit song Uncloudy Day, that further exposed the group to the media.

The Staple Singers' theme for their songs started out with gospel music that moved on to songs of protest, but they reached their peak by producing records which provided empowerment for the people during the 1970s. Their song entitled "Let's Do It Again" became a chart-topper in the Billboard Hot 100 Singles Chart.

The Faithful Encounter with The Pacifist

Due to their popularity, they were invited to perform for a concert held in Montgomery, Alabama in 1963 of which they obliged. The renowned champion of civil rights Dr. Martin Luther King Jr. was in attendance to this concert. Afterward, they had the opportunity to meet and speak with King. Greatly influenced by King's belief, their songs took on a new meaning. From singing gospels, they shifted to writing songs that encouraged the civil rights movement in America. One of their popular hits by then is entitled "March Up Freedom's Highway" in regards to the people's march from Selma to the capital of Montgomery.

Staples as a Solo Artist

Mavis Staples released her first album as a solo artist in 1969 but did not receive much attention. She gained commercial success at the release of her album entitled Have A Little Faith in 2004 followed by her 2007 album release of We'll Never Look Back.