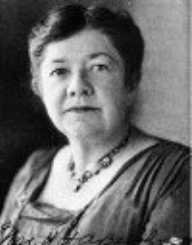 Amy Beach was born on 5th September 1867, to Charles and Clara Cheney. Amy Beach was recognized as a child prodigy. She could sing at least 40 songs by the age of one, and by the age of three, had taught herself how to read. She was composing waltzes by age five.

Her mother was a talented pianist and singer and would play the piano and sing for Amy Beach. Even at such a young age, Amy Beach would dictate what music was to be played and how, and would often through tantrums if her family didn’t comply. Her family struggled to keep up she was so advanced.

Amy Beach ’s mother forbade her to play the piano, because she believed it would usurp their parental authority. Her formal piano lessons began at age six. Even very talented women were discouraged from a career in music, as at the time, being a stage performer had a certain stigma about it, which was not suitable for upper-class families such as the one Amy Beach came from. Even so, at age seven, Amy Beach  performed some public recitals. She played classical music as well as some of her own compositions. She was offered a tour, but her parents declined.

When Amy Beach  was eight, her family moved to Chelsea, which was on the other side of the river from Boston. Her parents hired local tutors for her piano training. Her first teacher was Ernst Perabo, and following that, Carl Baermann. Baermann had, himself, learnt from one of the most talented European pianists in Munich. When she was 14, Amy Beach  studied composition for a year with Junius Hill. This was the only formal training she had in composition.

Amy Beach ’s debut concert was in October 1883, in Boston. It was critically acclaimed, and was also loved by the audience. She continued to perform over the next two years. In 1892, she had her first major success as a composer, when the Handel and Haydn Society orchestra performed one of her works. The performance catapulted her into the limelight, becoming one of the most well-known composers in the United States. She was also the first woman to have a piece performed by the orchestra. Amy Beach  then went on, in 1896, to compose the first symphony to be composed by a woman. It was performed by the Boston Symphony and was extremely well received.

Amy Beach  then went on, over the next few years, to perform both her own music and that of other famous composers. Over the ensuing years, Amy Beach  moved into chamber music, and wrote a piece called “Sonata for Piano and Violin”. Although not so well-received in the United States, it was much more popular in Europe. As part of the Kneisel Quartet, of which she was a member, Amy Beach  toured extensively in 1916 and 1917 before they gave their last performance.

After her husband died in 1910 and her mother a few short months later, Amy Beach  travelled to Europe to convalesce. She rested for 12 months to recover from her losses, and then for the next two years, toured Europe, once again performing. She was very well received, and recognized as an American composer who could produce music to the same standard as European composers.

Amy Beach  returned to the United States in 1914 just after the war broke out. For the next few years, she lived between San Francisco and New York. She also had a cottage in Massachusetts where she spent several summers writing. From 1914 to 1921, she earned her living from the sale of sheet music. The sale from just one song alone enabled her to purchase her summer cottage.

When Amy Beach ’s aunt died in 1925, she no longer had any close relatives. She sold her house in Boston, and moved to a studio apartment in New York. She also became the composer for the church she attended, who had been playing her music for over 20 years. Because of her musical standing, Amy Beach  became a much sought after teacher and public speaker, and was free to pursue these areas now that her husband had died. She was President of the Board of Councilors of the New England Conservatory of Music.

Amy Beach  gave advice and coached young composers and musicians to help them further their careers. In 1928 and 1929, Beach spent time in Rome, attending performances daily. She returned to New York, and worked until 1940, when she retired from ill-health.

Beach’s first major work was “Mass in E-flat major” which was the piece that made her one of the recognized composers of her time once it was performed by the Handel and Haydn Society orchestra.

Her next major work was “Gaelic Symphony”. The symphony was composed in 1896, and performed by the Boston Symphony, once again with extreme success.

In 1885, Amy Beach  married Dr. Henry Beach. He was a surgeon in Boston, and was 24 years older than Amy Beach . Unfortunately, Dr. Amy Beach was very authoritarian, and stifled Beach’s creativity. She agreed that she would not give more than two public recitals per year, and the profits would be donated to charity.

She took up more composing, which was what her husband preferred, even though she saw herself first and foremost as a pianist. She also had to do any composition study on her own, as her husband did not approve of her studying with a teacher.

In her marriage vows, Amy Beach  agreed to live according to her husband’s standing in the community, which meant she was to be a society matron and patron of the arts. Teaching piano was out of the question.

Amy Beach ’s legacy will live on through her music. Although her music fell out of favor for a while, it became very popular again in the early 21st century and continues to be popular as the time passes.