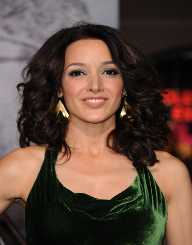 Jennifer Sue Beals is an American actress best known for her starring role in Flashdance and the TV series The L Word.

Beals was born 19 December 1963 in Chicago Illinois. Beals grew up in Chicago and developed a love of acting while working in her high school’s production of Fiddler on the Roof. Beals’ first job was working in an ice cream store for Baskin Robbins. Beals was 13 at the time but lied about her age to get the job. She is mixed race, her father Alfred Beals was African American and her mother, Jeanne, Irish-American. Beals has two brothers, Robert and Gregory. Beals claims being mixed race made her feel like an outsider growing up. Her father owned a grocery store and died when Jennifer was ten years old. Her mother was a school teacher and remarried in 1981. At age 16 Beals began a modeling career to try and earn money for college. She appeared in local print ads and in store catalogues. Beals worked with Chicago based photographer Victor Skrebneski. During her summer breaks, Beals served on the board of the Illinois Teenage Institute on Substantial Abuse.

Beals graduated from Francis W Parker School and it was here that her love of acting was fostered. She also attended workshops at the Goodman School of Drama. Upon graduation, she attended Yale University. She studied American Literature in Yale and graduated in 1987 with a B.A in American Literature.

Beals began modeling aged 16 to earn money for college tuition. In her modeling career, she worked on shoots in Paris and New York for French Vogue and Town and Country. Beals’ first movie role was as uncredited role as an extra in MyBodyguard. Her second will film role would launch Beals to stardom. While still in college Beals played Alex Owens, the lead role, in the film Flashdance. The film remains iconic for Beals legwarmers and off the shoulder sweatshirt. It was the third highest grossing film of 1983 and made Beals famous. Following Flashdance’s success, Beals returned to college and turned down numerous roles. Beals continued modeling and appeared in a number of French campaigns. She also did work modeling for the Japanese cosmetics brand Shiseido. Her acting focussed more on indie films and films directed by her then-husband Alexandre Rockwell after Flashdance.

In 1995 she starred alongside Denzel Washington in Devil in a Blue Dress. The film was based on a book close to Beals' heart and she fought hard to get the role. This was followed by a string of minor roles or independent film parts. In 2003 Beals again found huge success playing Bette Porter in the TV show the L Word. The LWord was a drama that focussed on the lives and relationships of a group of lesbians and their friends in Los Angeles. The show ran for six seasons and seventy episodes. Beals appeared in a number of tv shows after the L Word ended in 2009, these include Lie to Me, Chicago Code and Proof. In 2010 Beals once again starred alongside Denzel Washington in The Book of Eli. Beals most recent film Before I Fall is scheduled for release in March 2017. Beals has also turned down a number of major roles during her career including Catwoman in Batman Returns and a role in St. Elmo’s Fire because of her commitment to her studies in Yale.

Alex Owens in Flashdance (1983) remains Beals most iconic film role. She has also received acclaim for her work alongside Denzel Washington, playing Daphne Monet in the Devil in a Blue Dress (1995) and Claudia in the Book of Eli(2010). Her TV roles of note are Bette Porter in the L Word (2004-9), Amanda Dickinson in A HouseDivided(2000) and Teresa Colvin in Chicago Code (2011).

Beals has been married twice. She married first husband Alexandre Rockwell in 1986 and they made several movies together. The pair divorced in 1996. Beals married her current husband Ken Dixon, a Canadian entrepreneur in 1998 and the pair have a daughter together.

Beals claims to be a spiritual person. Her mother was a Roman Catholic, but Beals is a practicing Buddhist although she states that she is a student of many religions. Beals met the Dali Lama in 2011 and gave a speech about arts place in bridging the faith divide.

Beals was diagnosed with Epstein-Barr virus, lupus, and thyroiditis in the 1990s. This left Beals suffering from chronic fatigue. She has treated herself with alternative medicine and nutritional and fitness plans.

Beals enjoys Yoga and Pilates as part of her fitness regime. She also enjoys hiking. Beals is also keenly interested in photography and has published some of her work. Her interest in photography began in high school. Beals was living in New York at the time of 9/11 and took photos of the events that unfolded that day. Beals later donated her photos to a charity raising funds for victims of the attacks. Beals also documented her time on The L Word and the photos were later published in a book titled L Word Book. Beals is a keen reader and enjoys the Greek mythology genre. Beals is also a triathlete, a practitioner of kung fu and a kickboxer. She enjoys dance, especially the ballet, but turned down an offer to appear on Dancing with the stars.

Beals is involved with a number of charities and is a very active advocate of lesbian gay, bisexual and transgender rights. Beals has raised money for the Matthew Shepard Foundation, the foundation is a charity that works to overcome hate against the lesbian, gay, bisexual and transgender community. Beals has also supported Pablove Foundation a charity that raises money for research into paediatric cancers. Money raised from the sales of the L Word Book were donated to the ‘I Live Here Projects’ which tell the stories of displaced women and children from war zones around the world.

In 2010, while marshal of the Thanksgiving Parade in Chicago, spoke about the work of the Matthew Shepard Foundation and the Pablove Foundation. Beals was also a celebrity grand marshal in the 2006 San Francisco Pride Parade. She received the Human Rights Campaign’s Ally for Equality Award in 2006 for her support of lesbian, gay, bisexual and transgender rights.