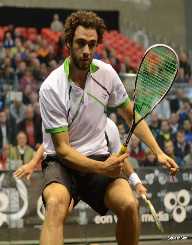 Ramy Ashour was born on September 30th, 1987. He is famous for beings squash player. His interest in the sport grew from the time he was young. It was not until in 2010 that Ashour was crowned as the world’s number 1. He earned this position after defeating Nick Mathew during the Saudi International Squash Tournament in 2009. Winning this tournament at the age of 22 was a record-breaking performance in his career and to the competition. This is because he was the youngest player to achieve this. While playing in junior competitions, Ashour exceptional performance landed him as the World Junior Squash champion for two times.

Ramy Ashour was born on September 30th, in 1987. His place of birth was in Cairo, Egypt. Because his parents worked in EgyptAir, Ashour spent most of his childhood touring the world. With the encouragement of his father, his interest in playing squash developed from the time he was six years old. Ramy has a younger brother named Hisham Mohamed Ashour. He is also a professional squash player.

In 2004, Ramy competed in the World Junior Squash Championship under the men’s category. At this time, he was only 16 years old, and he later emerged as the overall winner. This victory made him the youngest player to win this title. With his talent and expertise on the game, he won the same title in 2006. This was also another record that he placed under his name. He was the first squash player to win the title twice. During the same year, he participated in a team event for the World Junior Squash Championship in which he aided his team in defeating Pakistan during the finals.

A year later, Ramy contested Canadian Squash Classic where his outstanding proficiency earned him another title by beating David Palmer. He defeated him in only 32 minutes. Still, in 2007, he earned himself high acclaim by defeating Amr Shabana while contesting in the Kuwait Open.

His career turning point came in 2009 after bagging home both the PSA Masters and the Saudi International. This earned him the recognition of being the world’s number 1 the following year in early 2010. This was a major achievement for him as he became the youngest player to attain this feat over the past 26 years in the sport. 2012 was another year of success for Ramy. This is for the reasons that he managed to compete in the finals of every tournament that he contested in. This was a record that was previously held by Jansher Khan. In this year, he was the winner of several tournaments including Australian Open, US Open, Qatar PSA World Championship and Hong Kong Open.

In 2013, Ramy competed in the World Championship where he had set an unbeaten record of 49 victories before being challenged by Nick Mathews. After sustaining several injuries on the court, he was out for six months. However, in 2014, he successfully claimed his 3rd World Championship title.

Ramy Ashour is always honest about his passion for music. It is through music that he finds inspiration to find new moves in the squash sport. Part of his hobbies is traveling and learning from new cultures. Little information is known about Ramy’s dating life.