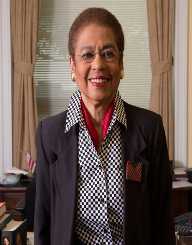 Eleanor Holmes Norton graduated from Dunbar High School before obtaining a BA (1960) from Antioch College in Yellow Springs, Ohio. She then enrolled at Harvard University and did an MA (1963) in American Studies and obtained a law degree from Yale University Law School (1964).

After graduation, Eleanor Holmes Norton took up a position as a law clerk to a federal district court judge in Philadelphia. She then relocated to New York City where she worked as assistant legal director of the American Civil Liberties Union from the mid-1960s until 1970. She became an adjunct assistant professor at New York University Law School in 1970-1971. Between 1970 and 1977, she was on the staff of New York City mayor John Lindsay. She was also chair of the United States Equal Employment Opportunity Commission from 1971 until 1981.

Elected as a non-voting Democrat from the District of Columbia in January 1991, Eleanor Holmes Norton won re-election fourteen times.