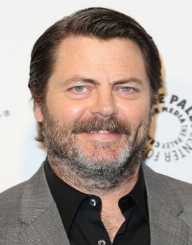 Nick Offerman was born on June 26, 1970, in Joliet, Illinois, USA. His parents are Cathy and Ric Offerman. He also has three siblings.

During high school, Nick Offerman was in a variety of clubs which helped him to improve himself in many different subjects. It was while in high school that he played sports, learned how to play the saxophone, and took an interest in acting. He later graduated from high school in 1989.

After graduating from high school, Nick Offerman went on to study at the University of Illinois. It was here where he began professionally studying acting. He also worked on set design, building various props for plays. He later graduated from this school with a bachelor’s degree in 1993.

After college, Nick Offerman moved to Chicago. There, he began working for Defiant Theatre. He worked as both an actor and a carpenter for this company. He continued to make props like he had in college. Sadly, working in plays did not pay well enough for Offerman to focus all of his time and energy on acting. He also used his carpentry skills to work off of the stage as well.

Beginning in the late 1990’s, Nick Offerman started to take on small roles in movies. One of his first major breaks was when he had a small role in the film, Going All the Way. While the film itself was not particularly great at showcasing Offerman’s skills, the director of the film knew that Offerman had talent that shouldn’t be denied from the big screen. It was in part because of the encouragement of this director that Offerman moved to Los Angeles, California, to more seriously pursue a career in acting. However, even while there, he had to continue working carpentry jobs to meet ends meet.

In the late 1990’s throughout the early 2000’s, Nick Offerman played small roles in movies and guest star positions in television shows. These shows did not earn him much fame. Some of the shows and films he worked on early on in his career are listed below.

It wasn’t until 2009 that Offerman’s career took off. Nick Offerman earned the role of Ron Swanson on the comedic workplace television show Parks and Recreation. He had previously auditioned to be on a similar show, The Office, but did not get the role. However, one of the people working on the show remembered him from his audition and invited him to work on Parks and Recreation. The character of Ron Swanson seemed to be written for him. He worked on this show from 2009 until the show’s end in 2015.

After Parks and Recreation, Nick Offerman also took on many repeat roles on other television shows like Comrade Detective, Fargo, Gravity Falls (Voice), Axe Cop, and Children's Hospital. As of 2017, Offerman continues to act in both television shows and movies.

Nick Offerman owns the Offerman Wood Shop in Los Angeles, California. He has designed several products for the store and has hired others to make his designs. In his spare time, he works on new designs. Classes given by workers at the store are also available at certain times

Nick Offerman has written three autobiographical works; they are Paddle Your Canoe: One Man’s Fundamentals for Delicious Living, Gumption: Relighting the Torch of Freedom with America’s Gutsiest Troublemakers, and Good Clean Fun: Misadventures in Sawdust.

Over his long acting career, Offerman has won a couple of awards, and he has been nominated for many others. Some of his most impressive awards are listed below.