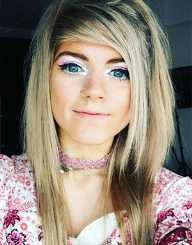 Marina Joyce was born on February 1, 1997, in England. She is an English You Tuber and Vlogger. She is of British nationality. She is twenty years old. She was born to her mother, Cheryl Joyce. She has two siblings namely Elliot and Joyce. She is a fashion Vlogger as she is a fashionista. She has a YouTube Channel where she posts her videos. Her videos include makeup tutorials among other videos that portray her daily life. She has her sort of personality when she is on screen, and it is considered awkward by many of her fans. She loves using a lot of hand gestures in her videos. She has a lot of fans because of her videos in makeup and dress ups.

Marina Joyce was just a simple girl who regarded the use of YouTube as a way to pass the time. She never dreamed of becoming a You Tuber or pursuing any career in YouTube. She was however inspired by fellow English You Tuber Sam Pepper’s videos and Vlogs. She, therefore, decided to create a YouTube channel. She created her YouTube channel when she was fifteen years old. The first video she uploaded on her channel was titled ‘Bathroom Vlogging.’ The footage showcased her bubbly personality, and people enjoyed the video, and so they wanted to get more videos from her.

Marina Joyce is very good at eye makeup, and this attracted many people to her who kept on asking her how she does her makeup. She, therefore, changed her channel to beauty and fashion channel where she posts videos of makeup tutorials and dress up videos. She uploaded her first makeup tutorial titled ‘Super Long Eye Lashes Makeup Tutorial’ which became very popular within a brief period. She has more than two million subscribers to her YouTube Channel and so she has become a popular You Tuber with so many videos in her collection. Her channel has videos from makeup tutorials to short sketches such as ‘How to Make a Boy fall in Love with You.’

Marina Joyce is a very creative lady, and she loves what she does. She has captured the attention of many through her personality and the way she expresses herself. She is hardworking and determined to make something out of her career. She confesses in some Vlogs that she was often bullied in school, but this did not bring her down as she would always come up with a way to cope. She encourages her followers and fans not to be brought down by what people think about them. She spent her school days lonely, but now she has a lot of friends through her popularity as a You Tuber.

Marina Joyce spreads good vibes and cheers to her audience through her videos. She was once a topic in England when she posted a video where she had a change in demeanour. Many people thought that she had been kidnapped or she was using drugs. The hashtag #SaveMarinaJoyce trended with many people claiming that she needed help. Marina later stepped in and made known that she was fine and that she had not been kidnapped and she was not on drugs.

Marina Joyce was born in England as Marina Rose Iris Louise Joyce to her mother, Cheryl Joyce. Her family has been supportive of her career. She loves spending time with her friends and family. Nothing is known about whom she is dating, but currently, it is speculated that she is single. She loves her brothers Elliot and Anthony, and at times they make guest appearances in her videos.