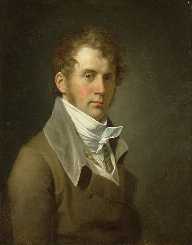 Aaron Burr was the third Vice President of the United States, serving during President Thomas Jefferson's first term. He was also known as the man who killed Alexander Hamilton, becoming one of the most notorious traitors in history.

Aaron Burr was born on February 6, 1756, to parents Reverend Aaron Burr and Esther Edwards Burr. He was born in Newark, New Jersey, but was orphaned at two. Aaron had an older sister named Sarah. He and his sister were later raised by his maternal uncle, Timothy Edwards two years after the death of their parents. The next year, Timothy married Rhoda Ogden and moved to Elizabeth, New Jersey, near her family.

Aaron Burr applied to study in College of New Jersey (later Princeton) when he was eleven years old, but he was refused. He tried again at the age of thirteen and was admitted as a sophomore.  He graduated at the age of seventeen.

After graduating from the College of New Jersey, he began studying law at Litchfield Law School in Connecticut. His studies stopped with the start of the Revolutionary War. He resumed his studies in 1780 and became a licensed attorney in 1782. He was also admitted to the bar, and had successful private practice in Albany, New York.

During the Revolutionary War, Aaron Burr joined Benedict Arnold and team to Quebec after unsuccessful in his compassion for George Washington’s Continental Army. In Canada, he joined General Richard Montgomery but was defeated. By the spring of 1776, Aaron Burr got to the rank of major and was appointed to serve under George Washington in New York.

He was the lieutenant colonel in 1777 and took command of a regiment. He was successful in the battle of Monmouth and later transferred to the “neutral ground” north of New York City. Aaron Burr guarded against British guerilla raids and calvary forays. He moved to the staff of General Israel Putnam until retiring from his commission in 1779.

Aaron Burr moved to New York City, where he would spend the next six years practicing law in 1782. In 1789, he was appointed attorney general of New York. He commanded hefty fees and soon set his sights on politics. In 1783, he was elected to the New York Assembly, and six years later he was the state’s attorney general.

He took a United States Senate seat from Philip Schuyler, but only held the position for one term in 1791. After six years, Aaron Burr lost re-election to Schuyler. In 1799, Aaron Burr founded the Bank of the Manhattan Company.

Later it was absorbed into Chase Manhattan Bank, becoming part of JPMorgan Chase. In September that year, Aaron challenged John Barker Church to a duel. Church alleged that Burr had been bribed by the Holland Company, in exchange for political influence. Burr and Church missed each other, and afterward, Church acknowledged that he was wrong to throw accusations without proof. Burr accepted the apology and ended the dispute.

In 1800, he became Thomas Jefferson’s presidential running mate. They each received the same amount of electoral votes, so members of the House of Representatives had to decide who was president. Aaron Burr's rival, Hamilton, vocalized his disapproval of Burr, leading to Jefferson’s win. Hamilton resented the way Aaron Burr founded the bank, as it was solicited under the guise that he was establishing a water company for Manhattan.

Jefferson gave Aaron Burr little power during his run and even barred the vice president from being nominated the second term. In 1804, Aaron Burr ran as an independent candidate for governor in New York, with covert Federalist backing.

But with Jefferson’s support, George and DeWitt unleashed slanderous attacks on Burr in the press, resulting from a landslide loss to Morgan Lewis. However, as Alexander Hamilton had spoken out against Aaron Burr prior; although his words had little effect on the election, Aaron Burr tried to restore his reputation by challenging his nemesis to a duel.

On July 11, 1804, Aaron Burr shot Alexander Hamilton dead on the dueling grounds at Weehawken. Dueling was outlawed in New York, but New Jersey had less consequence. Hence Aaron Burr was charged with murder in both places. Aaron fled to South Carolina, hiding in his daughter's family, but had to return to complete his term as Vice President.

All the charges against him were eventually dropped. He presided over the impeachment trial of Samuel Chase, an associate justice of the U.S. Supreme Court. Burr helped Chase to obtain an acquittal.

When The United States purchased the Louisiana Territory from France in 1803, Aaron Burr started his plans. When he finished his term as vice president in 1805, Aaron leased 40,000 acres of land—known as the Bastrop Tract—along the Ouachita River, from the Spanish government.

But he had planned to conquer some of Lousiana and maybe Mexico, and crown himself an emperor. But his plans were derailed by James Wilkinson, Commander- in Chief of the U.S. Army and Governor of Northern Louisiana Territory. Aaron Burr was captured in Louisiana in 1807 and taken to Richmond, Virginia to stand trial.

He was acquitted due to lack of evidence, and there was only a witness who had doctored a letter to implicate him in the offense. Facing condemnation, Aaron Burr fled to Europe to avoid his creditors as well.

After living in Europe from 1808 to 1812, Aaron Burr returned home to New York under surname “Edwards.” His attempts to solicit funding for the conquest of Mexico was rebuffed by Europeans. When he returned to New York, United States was on the brink of war with Britain. Hence people had forgotten about him.

Aaron Burr got the charges dropped so he could once again practice law. His daughter Theodosia was dead in a shipwreck in 1813. In 1833, at age 77, Burr married Eliza Jumel, a wealthy widow who was 19 years his junior. They lived together briefly at her residence. When she realized her fortune was being drained by her husband's land speculation losses, she divorced Burr after four months of marriage.

Aaron Burr suffered a stroke in 1834, which rendered him immobile. When the divorce was officially completed on September 14, 1836, he died at the age of 80. He was buried near his father in Princeton, New Jersey.