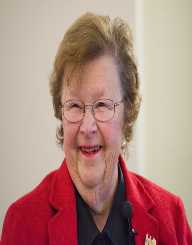 Barbara Ann Mikulski is a Democrat who served in Congress for ten years becoming the longest-serving woman in the House of Representatives. She chaired the Committee of Appropriation in 2012.

Barbara Mikulski was born in Highlandtown town on 20th July 1936. She was the third born daughter of William Mikulski and Christine Eleanor. Both her parents were Polish immigrants.

At an early age, she assisted her parents at a grocery store in delivering groceries to elderly neighbors who were unable to leave their homes. After her high school, she enrolled in Mount Saint Agnes College where she graduated with a Bachelor of Arts in 1958.

She furthered her studies in University of Maryland School of Social Work, where she graduated with a Social Work master’s degree.

After completing her studies in 1965, Barbara Mikulski worked as a social worker for a Catholic church in charity works. The program was aimed at helping vulnerable children.

She led neighboring communities in Baltimore to reject a plan to build a road in the interstate 95. The plan was later stopped. The act became a foundation of her life.

In 1970, Mikulski made a powerful speech at a conference in defense of the ethnic Americans. Her message went on to become the reference point of various ethnic movements.

Barbara Mikulski began running for a political journey in 1971. She won the seat of Baltimore City Council. It was during her term when she tried her luck in the U.S. Senate seat.

Two years after her failed attempt to get into the Senate she won the U.S. house of the representative seat. During her term, she oversaw legislation to protect children rights and advocated for equal rights.

She made her second attempt into the Senate in 1986, becoming the first female Democrat in Maryland to win the Senate seat. Her most notable supporters were musician Carly Simon and famous feminist Gloria Steinem.

In the Senate, Barbara Mikulski was a champion of women issues. Some of her work in the Senate include introducing legislation seeking to halt cancer screenings.

She won her seat for the second term in 2011. She went on to campaign for various women across the United States of America. Her focus was to bring more women to the Senate.

After her 30years of service, Mikulski announced her retirement from public service in 2015. Despite getting many quarters hatching her to run for another term, she made her decision to retire.

She supported Hillary Clinton during her attempt to ascend to the United States president seat.

Barbara Mikulski was never married. She spent the better part of her life in the public service. Her closest family members are her two sisters.