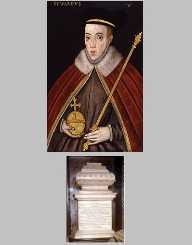 Edward V of England who succeeded his father Edward IV after his death on April 9, 1483. Born on November 2, 1470, he reigned from April 9, 1483, to June 26 that same year. He was not officially crowned as King. The reign that lasted for86 was overtaken by his uncle and Lord Protector, Richard, Duke of Gloucester to become Richard III. Edward V of England as denounced any further claim to the throne through his father’s heir by the Act, Titulus Regius. As a child, Edward V of England was made Prince of Wales and became the nominal president of the Council of Whales and Marches at age three.

Edward V of England and his brother Richard of Shrewsbury, Duke of York disappeared in 1483 under bizarre circumstances while lodging in the Tower of London. Richard III is being alleged to have taken their lives in order to ascend to the throne and clear any further obstacles.

Edward V  of England was born on November 2, 1470, in Westminster Abbey, England, United Kingdom  to Elizabeth Woodville and the Yorkist King Edward IV. The Lancastrians had overthrown King Edward IV during the Wars and Roses. Hence Elizabeth sought refuge in Westminster Abbey. At age one, Edward V of England was made the Prince of Wales after his father, Edward IV was restored as King. Edward V of England was then made the nominal president of the Council of Wales and the Marches at the Ludlow Castle on the Welsh Marches at age three in 1473.

Growing up, Elizabeth’s brother, Anthony, Earl Rivers was given the responsibility of Edward’s upbringing and supervision under strict conditions by Edward IV. With these strict conditions and education, Edward V of England politeness, wisdom, thinking and posture superseded his age. At age ten, he was betrothed to the Duke of Brittany, Francis II, daughter, Anne. This was to ensure greater alliance and planned succession between the two; however, none could come to fruition with the disappearance of Edward V.

At Buckinghamshire, Edward V of England dined with them on 29 April, but to his dismay, the three were arrested the next morning and sent to the north where they were executed. Edward V  of England's other entourage were all dismissed even though he protested against the act, according to reports by an Italian, Dominic Mancini who visited England in the 1480s. Something smelled fishy with those developments, but no one could pinpoint was going to happen next.

Edward V of England was escorted by his uncle, Richard to London, where Edward V of England settled in the in the heavily guided Tower of London on 19 May 1483. His younger brother, Richard, Duke of York, also joined him on June 16, same year. While in London, the council sought to embark on early coronation in order to eliminate the need for a protector, but his uncle Richard continually postpone it. There were precedents of kings being installed at a very young age with examples being Richard II, who was enthroned at age 10 and Henry VI who was also enthroned at age seven.

Even before the coronation could happen, there was a different development of the issue, after a sermon byRalph Shaa on June 22, 1483. According to him, King IV marriage to Elizabeth Woodville was invalid because the king had already contracted to marry Lady Eleanor Butler. With this, all his children with Elizabeth remained illegitimate and could not ascend to the throne. His uncle, Richard was then crowned as the legitimate king and became King Richard III.

According to accounts of the Italian Dominic Mancini, Edward V of England and his younger brother Richard, Duke of York who had joined him for the coronation was taken to the inner apartment of the Tower of London where they lodged. The two brothers were seen less and less until they finally disappeared from public view in summer 1483.

Accounts on how they disappeared remain unknown, but there was a conspiracy theory which suggests that they were murdered on the orders of their uncle, King Richard III. The likes of Thomas More believing they were suffocated to death with pillows. The remains of the brothers were found by workmen during the rebuilding of a stairway of the Tower of London in 1674. They were interred in Westminster Abbey on the orders of King Charles II. There have not been adequate proof that those bones are those of Edward and Richard.