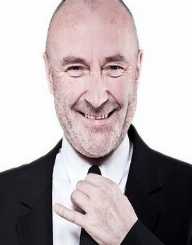 It’s now in the morning, and I have woken up with a dreaded hangover. My one time night has changed my life to none. I have nearly lost myself. The only thing left for me is to engage with my clearheaded mind and reflect more. I don’t know how I have ended up like that. All by myself engulfing in the underpinned part of a bottle. From the look of things, Phil Collins wants to remind you that he is still alive and kicking. According to sources, he admitted that alcohol nearly killed him after he separated with her loving third wife, Orianne. The good thing is that they are now happy together. He is not a retiree and if you try to mention the word in his presence; be ready to see his grimace face.

In fact, at 65 years he is jovially enjoyed his work. He makes a perfect actor, photographer, multi-instrumentalist, songwriter and much more. He seems to have a great story to share. So read along to understand more.

Known as Phillip David Charles Collins, he was first seen in the world on January, 30, 1951-Chiswick, London, England. Collins, his father was an insurance executive. June Collins, her mother was a renowned booking agent. Phil Collins came to realize his love for drums at the age of five. At the age of 12, he had his favorite drum kit. This made him pursue his dreams further by playing his favorite song every place.

In 1965, he furthered his talent beyond possibilities. With his mother’s guidance, he joined Barbara Speaks Stage School. Later on, Phil Collins was lucky to find an Artful Dodger role in Lionel Bart’s production of Oliver. He gave it all through modeling and acting. The good thing is that he knew how to balance between his love for drumming and music. His fondness led Collins to start The Real Thing group band. The team played the Motown cover tunes as well as span-time songs.

In 1970 Phil Collins joined Genesis band governed by Peter Gabriel. Both were renowned artists in the U.S and U.K. In 1975 the leading singer Peter Gabriel left the group. Phil Collins took his position in 1975.

The band opted to allow Collins to take the lead when Genesis auditioned 400 singers without triumph. His gratifying music made everyone look out. Collins managed to set his first solo album in 1981, which was welcomed by the audience with open arms. In fact, it turned out to be an enormous hit that was incomparable with any Genesis album. The song “In the Air Tonight,” took the best part of his voice.

In the early ‘80s, Phil Collins managed to balance between his solo work and Genesis membership. He later released “We Can’t Dance” in1992. That is where he began a comprehensive tour. In 1995 Collins left The Genesis Band permanently. The following year, he was waving around with new hit song “Dance into the Light.” His extensive tour was a success though the song didn’t become a hit as he expected.

Awards for Phil Collins kept flowing now and then, in fact for two years consecutively. Phil Collins took the Brit Award for British Male Solo Artists - 1989-1990. He later won British Single in 1990 for “Another Day in Paradise.” Aside from commissioning high accolades in his career and Genesis band, he is also a humanitarian. Since 1983 he has been an agent of the Prince’s Trust and was lucky to receive a Lieutenant of the Victorian Order Award. He is also a big supporter of PETA (People for the Ethical Treatment of Animals) - the animal rights campaign.

Phil Collins was overwhelmed by various accolades as his music was gradually discovered by new fans. Early March, 9th, 2011 Collins announced his retirement from the music field. The only man who played a concert in two different areas at the same time has decided to quit. Maybe he wanted to focus more on his family, but he has been a unique and loving father.

Above all, Phil Collins has proved to be a multi-talented performer. He welcomed roles such as being an actor, composer, prominent band leader, producer, soundtrack maestro, singer and drummer with determination, finesse, and incomparable drive.