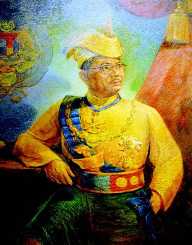 Tunku Abdul Rahman Putra Al-Haj ibni Almarhum Sultan Abdul Hamid Halim Shah II was a prominent Malaysian politician who started a career as a public servant. Born on February 8, 1903, be was the first Chief Minister of the Federation of Malaya from 1955 to 1957. After the country gained independence in 1957, Tunku Abdul Rahman became the first Prime Minister and remained in office until his retirement in 1970.

Tunku Abdul Rahman was born to Sultan Abdul Hamid Halim Shah, the twenty-fifth ruler of the Kedah Sultanate and Che Manjalara, his fourth wife. He was born on February 8, 1903, in AlorSetar, Kedah. During this period, cholera and malaria were predominant in Kedah, which resulted in the death of two of his siblings, while he also periodically suffered from malaria until he left for London to continue his education in 1920.

Tunku Abdul Rahman received his education at Debsurin School in Bankok in 1913 where he won a government scholarship in 1919 age 16, to enable him to study at Cambridge University. Two years afterward and seeing little progress in his education he met with his guardian Mr. Ezekiel in the office of the Crown agent who arranged for his move to Cambridge to be taught by Basil Atkinson. Atkinson prepared Tunku to sit for the Cambridge entrance examination, Little Go. He took the exams in 1920, which he passed and was accepted as an undergraduate at University of Cambridge’s, St Catherine’s College.

Tunku Abdul Rahman graduated from Cambridge with an honors degree in law in 1925. He then decided to sit for English bar exams in 1930, but the fact that failed in one paper meant he had failed in the entire examination. He would later sit for the exams in 1939, which he passed and was called to the English bar 1949. After the first failed attempt, Tunku returned to Penang in January 1931.

Tunku Abdul Rahman automatically became a government servant upon his return to since was on a government scholarship. He received an appointment as a Cadet in the Kedah Service in January 1931. Tunku Abdul Rahman was later sent to KulimAssistant Director Officer. He later sat for the Cadet Law exams, passing on his first attempt. After successfully passing the exams, he was promoted to Padang Terap as a District Officer.

Tunku Abdul Rahman held several other government positions. During the occupation of the Japanese in Malayan, Tunku Abdul Rahman played a vital role in the rescue of some of the citizens of Penang. He was at a period appointed the Superintendent of Education by the Japanese authority. However, some disagreement ensued between him and the officials resulting in his removal from office. The Japanese rule until they finally surrounded after an atomic bomb was dropped on Hiroshima and Nagasaki on August 6 and nine respectively.

Tunku Abdul Rahman accepted an appointment in the Federal Secretariat in Kuala Lumpur, after a meeting with the Attorney General, Fosters-Sutton in Kedah. Due to his hard work and dedication, Tunku Abdul Rahman was transferred with to become the President of Selangor Court. Around this time, he received an invite to become the Chairman of the Kedah branch of the United Malay National Organisation (UNMO), a political party formed by Dato’ Onn Bin Jaafar. After Onn stepped down as the president, Tunku Abdul Rahman was elected as his successor on August 23, 1951, and in his acceptance speech declared the need for Malaya be given independence as soon as possible. Tunku later sent a letter of resignation from his post as the President of the Sessions Court in Kuala Lumpur to the Chief Justice. The UMNO later formed an alliance with Malayan Chinese Association, MCA to become UMNO-MCA, with the main aim of fighting for the independent of Malaya. Onn at this time has also formed the IMP and was invited to join the alliance but rejected it. Onn later formed the Parti Negara. The parties contested in the State Council election in Johor and Terengganu, in which the alliance won a sweeping victory with Parti Negara having no seat. On July 27, 1955, a Federal Legislation election was held, and Tunku contested Johor Bharu after Onn has challenged him to stand against him since he was also contesting in that area.

Tunku Abdul Rahman won the seat, and in the election overall election, the Alliance won 51 seats and the Pan-Malayan Islamic Party winning one seat. He later set off to London to negotiate the independence of the Malaya people, and after a series of talks, it was agreed that Malaya would be given independently in 1957. This agreement was signed between Tunku and Lennox-Boyd on February 8, 1956.

After gaining independence in August 1957, Tunku Abdul Rahman became the first prime minister of Malaysia. He held the position even after the Federation of Malaysia was formed in 1963 consisting, Malaya, Singapore, Sabah and Sarawak. He relinquished his power in 1970 after Singapore left the Federation and his power started to wane.

Tunku Abdul Rahman married four times. His first wife was Meriam Chong, who he married while working in Kulim. The couple had two children, a daughter, Tunku Khadijah and son Tunku Ahmad Nerang. Meriam died due to a medical blunder when she was injected with undiluted quinine after contracting malaria.

Tunku Abdul Rahman then married his formal landlady in England, Violet Coulson. Violet converted to Islam after the marriage and was given the name Puteh Bte Abdullah. Since they needed the approval of the Reagent to make the marriage valid, Violet had to live in Penang because he did not accept the marriage. This was because Reagent Tunku Ibrahim, Tunku Abdul Rahman’s elder brother was opposed to mixed marriages.

However, after his death, his successor, Tunku Abdul Rahman consented to the marriage in 1934. The marriage ended in 1947 after separation due to Tunku’s commitment to work. Tunku Abdul Rahman then married Sharifah Rodziah Alwi Barakbah. They had no children on their own but adopted four children Sulaiman, Mariam, Sharifah Hanizah and Faridah.

Tunku Abdul Rahman later secretly married a Chinese woman Bibi Chong. She converted to Islam after the marriage and had two daughters Tunku Noor Hayati and Tunku Mastura. Tunku Abdul Rahman died on December 6, 1990, at age 87. He was interred at the Langgar Royal Mausoleum in Alor Star.