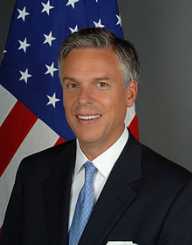 Jon Meade Huntsman Jr. is an American politician, diplomat, and businessman. Born on March 26, 1960, he currently serves as the US Ambassador to Russia. Huntsman has served several ambassadorial positions and has worked under five presidents. He has worked under President Ronald, George H.W. Bush, George W. Bush, Barack Obama, and Donald Trump. From 1992 to 1993, he served as the US Ambassador and in China from 2009 to 2011. He was also the Governor of Utah serving from 2005 to 2009. Huntsman was one of the Republican Party’s presidential candidate in 2012.

Jon Meade Huntsman Jr. was born to Karen and Jon Huntsman Sr. on March 26, 1960. Born in Redwood City, California, his father was a billionaire businessman and owner of Huntsman Corporation. His mother was also the daughter of David B. Haight, an apostle of Later Day Saint (LDS) Church. Huntsman joined the Boys Scouts of America, earning the rank of Eagle Scout at age 15.

Huntsman dropped out of Highland High School, to pursue his interest in music. He served as a keyboardist for the rock band, Wizard. However, he later continued his education earning a G.E.D and subsequently enrolled at the University of Utah. While there, he joined the Sigma Chi fraternity. Huntsman’s two-year missionary works in Taiwan for the Church of Jesus Christ of Latter Day Saint interrupted his university education. Following his service, he transferred to the University of Pennsylvania. In 1987, Huntsman graduated with a Bachelor of Arts in international politics.

Huntsman Sr. served as a special assistant to President Henry Kissing in the White House. During a visit to his father, in 1971, young Huntsman met the president, who confided in him that he was embarking on a secret journey to China. The gesture attracted the then eleven-year-old Huntsman to politics. This interest gradually developed, becoming a White House staff assistant in 1983, under the administration of President Ronald Reagan. A member of the Republican Party, Huntsman, was a state delegate at the Republican National Convention in 1988.

In 1989, Huntsman became a deputy assistant in the International Trade Administration under President George H. W. Bush administration serving until 1990. Following that position, he became the Deputy Assistant Secretary of Commerce for trade development and commerce for East Asian and Pacific Affairs. He served in that capacity from 1990 to 1991.

In August 2003, incumbent Utah governor Mike Leavitt decided not to go for the fourth term. Therefore, Huntsman decided to ran for the post. He contested in the Republican primary defeating State Representative Nolan Karras by 66-34%. Subsequently, he defeated Democrat nominee Scott Matheson Jr. to win the main election in November 2004. He won with 58% of the vote. Huntsman was re-elected in 2008, winning by a massive 77.7% votes to defeat Democrat’s, Bob Springmeyer. Huntsman was very popular and maintained over 80% approval ratings before leaving office in 2012. During his governorship, the Pew Centre named Utah as the well-managed state in the US. In addition, the Cato Institute grade him “B” on fiscal policy, an “F” on spending policy and an “A” on tax policy.

President Bush appointed Huntsman as the US ambassador to Singapore in June 1992. The US Senate unanimously approved his appointment in August. This made Huntsman the youngest US ambassador in 100 years.

Huntsman became the US ambassador to China during President Barrack Obama’s administration. He earned the position because of his proficiency in Mandarin Chinese coupled with his experience in the region. Nominated on May 16, 2009, he received Senate confirmation on August 7, 2009. With his new position, he had to resign as governor of Utah. Following his official resignation as governor, he was sworn into office on August 11, 2009.

Having presidential ambitions, Huntsman resigned on April 30, 2011. This was to enable him to concentrate on his 2012 presidential bid. President Donald Trump appointed Huntsman as the United States ambassador to Russia in March 2017. The Senate unanimously confirmed his appointment on September 28, 2017. Huntsman is believed to be behind the New York Times op-ed, “I am Part of the Resistance Inside the Trump Administration. He has however denied the claims.

Following his resignation as the US ambassador to China, Huntsman decided to contest the 2012 Republican presidential bid. Subsequently, he formed a fundraising political action committee on May 3, 2011. He followed it with the opening his national campaign office in Orlando, Florida on May 18, 2011. On June 21, 2011, Huntsman officially announced his decision to contest for the Republican presidential ticket. He announced the decision at the Liberty State Park in New Jersey. After falling third in the New Hampshire primary, Huntsman ended his campaign on January 16, 2012. He, therefore, endorsed the candidacy of Mitt Romney.

Jon Huntsman is married to Mary Kaye. The couple has seven children.