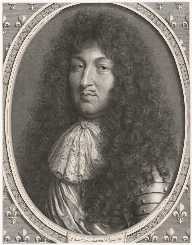 In 1661, the Cardinal died. It was at this time that the regency was dropped and that King Louis XIV of France had the full powers of a king. He also vowed to the French people that he would be the sole ruler of France. This meant that unlike other kings before him, he would not have a Chief Minister. This was a shock to many French people.

One of Louis XIV’s main goals was to reform France for the better. King Louis XIV of France first took to changing the royal and political-administrative workers. One of his most successful changes to the administration was hiring Jean-Baptiste Colbert, who was the Controller-General of Finances. While working in this position, Colbert was able to lower France’s debt.

Next on the king’s agenda was to take the Spanish Netherlands. He started a battle with the area in 1667. This war would come to be known as the War of Devolution. The war was named this because the word devolution is a form of inheritance. Usually, men would inherit most everything. However, under the devolution system, a daughter from a first marriage would gain more than the son of a second marriage. King Louis XIV of France wanted this system to be used, as his wife was the first daughter of Philip IV of Spain, while her younger brother was from a later marriage. With the current system, it was her brother who would inherit more, and King Louis XIV of France wanted to change that. The war ended in 1668, with the Treaty of Aix-la-Chapelle. This treaty did not create a purely devolutionary system, but it did divide up the lands between the king’s wife and her brothers. In the end, France earned several pieces of the lands in this area, including Furnaces, Charleroi, and Douai.

In 1669, King Louis XIV of France turned his attention away from war and towards the arts. He began funding several art and theater groups like the Academie d’Opera. He also commissioned art pieces and writing from several artists of the time. These commissions both beautified the country, as well as made French artists more popular all over Europe.

France entered into another war, the Franco-Dutch War, in 1672. In this war, he was again trying to earn more land in the Spanish Netherlands. However, this time King Louis XIV of France wasn’t working alone. France was now allied with Great Britain (under the leadership of William III of Orange). These countries were some of the most powerful in Europe at the time, making them a force to be reckoned with. In another twist, the Spanish Netherlands were not alone, either. The Holy Roman Empire was on their side. With this powerful ally, the Spanish Netherlands were able to fight off the French, at least for a while, in 1673. France later came back in 1674 with a new ally: Sweden. The allies fought hard, and they were doing well. However, the war was expensive. Even though France could have won the war if they had fought longer, King Louis XIV of France decided to sign the Treaties of Nijmegen instead, making peace between France and the Spanish Netherlands. France also gained more land after the war. The war was officially ended with the signing of the treaty in 1678.

For about ten years after the war, France focused not on war, but instead on making colonies around the world.  Many of these new colonies were in North America, namely in Canada and what is now Michigan. Many colonists also traveled down the Mississippi River, further colonizing land as far as what is now the state of Louisiana as they went.

In 1688, France entered into its largest war under Louis XIV’s leadership: the War of the Grand Alliance (also known as the War of the League of Augsburg). During this war, France was allied with England, the United Provinces of the Netherlands, and the Austrian Habsburgs (also known as the Habsburg Monarchy, which would later be known as the Austrian Empire, the Austro-Hungarian Empire, and finally Austria). These forces were fighting the Grand Alliance (also known as the League of Augsburg). The Alliance was formed by Emperor Leopold I. The countries in the alliance at this time were Palestine, Bavaria, Saxony, and Spain. This war was long and bloody, lasting about nine years. This war was mainly fought because Spain had two possible lines that could control Spain, and each side was fighting to retain or gain power in Spain. France was on the Habsburg's side. Over these years, many battles left both sides of the war badly damaged. Eventually, the war ended in 1697 with the Treaty of Rijswijk. Not much was gained from either side at the end of the war, but France did not lose much [land] in the war either.

After the war, in the early 1700’s, France was losing money quickly, mostly because war is expensive, and Louis XIV had spent more than his fair share of his reign fighting wars. Still, that didn’t stop him from entering into another war in 1701: the War of Spanish Succession. This war started in part because Charles II of Spain died without an heir. Prince Philip of Anjou (France) was named the new king of Spain to unite France and Spain. The Grand Alliance didn't like this, and so the war began. France was almost bankrupt at this point in their last war, so they didn't have much to give. During the war, Emperor Joseph I of Austria died (unrelated to the fighting). He was succeeded by Archduke Charles of Austria. The Grand Alliance hated the idea of having a Habsburg Austrian in power. This new threat to the Alliance was a bonus for Louis XIV. He signed the Treaty of Utrecht in 1913, which made his grandson, Prince Philip, remain the King of Spain, but only under the condition that Spain and France would remain separate countries.

During the last two years of his reign before his death, France was severely poor because of the many wars. Louis XIV died as an unloved king by his people.

King Louis XIV of France was first married as a teenager in 1660 to Maria Theresa of Spain. The couple had many children together, but only one son survived into adulthood. Sadly, Maria Theresa died in 1683. He married again later to Francoise d’Aubigne (who had formerly been his mistress). Throughout both of his marriages, he also had many mistresses, who he had many children with. He is likely to have had children that historians don’t know about. Some of his children who lived into adulthood were Louis (Dauphin of France), Marie-Thérèse de France, Philippe Charles de France, Marie Anne de Bourbon, Louis de Bourbon (Count of Vermandois), Louis Auguste de Bourbon (Duke of Maine), Louise-Françoise de Bourbon, Louis César (Count Vexin), Louise Marie Anne de Bourbon, Françoise-Marie de Bourbon, and Louis-Alexandre de Bourbon (Count of Toulouse).

During the last days of his life, King Louis XIV of France suffered gangrene, which would later cause his death. He died on September 1, 1715, in the Palace of Versailles. He was 76 years old when he passed away. He was succeeded by his great-grandson, Louis XV (former Duke of Anjou).