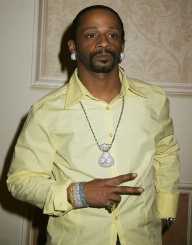 Actor and comedian Micah Sierra Williams was born on the 2 September 1971 in Cincinnati, Ohio and raised in Dayton. He left home at a young age and moved Florida where he fended for himself as a young teenager.

After moving to Florida in his early teens, Katt Williams worked as a door-to-door salesman and did various jobs to support himself. He then got involved in stand-up comedy and decided to try and make a career of it when he realized that he had a real talent for making people laugh. To polish his skills, Williams performed in clubs and bars all over the United States. He became recognized as a gifted comic, and by the late 1990s, Williams appeared alongside Martin Lawrence, Dave Chappelle and Chris Rock at iconic venues such as The Comedy Club, The Improv, and The Icehouse.

His first television appearance was a guest star on NYPD Blue in 2002, and this led to roles in The Tracy Morgan Show, My Wife and Kids, The Boondocks and other shows. Katt Williams also made his film debut in 2002 with playing the role of Money Mike in Friday After Next. He followed this up with a role in Bastards alongside Owen Wilson and Ed Helms, Rebound (2005), Epic Movie (2007) and Norbit (2007). He was given a role in the MTV improv show Wild ‘n Out (2005-2007) and then appeared in First Sunday (2008).

Williams continued touring and also had several NBO specials that were wildly popular. Shows that he traveled with which were aired as HBO specials included The Pimp Chronicles Pt.1; It’s Pimpin Pimpin, Priceless: Afterlife, Kate Williams Live and American Hustle. These shows drew record-breaking numbers for the network.

In 2015 Williams announced that he was taking a break and was quiet for most of the year. During 2017, he was on his Great America Tour which includes the United States, Sweden, Norway, and Holland.

Arrested after an argument with three fans in Seattle in December 2012, Washington, Williams initially said that he was quitting his career, but shortly afterward, he retracted his statement. He was also arrested in January 2013 for a motor vehicle-related charge in Sacremento, California.