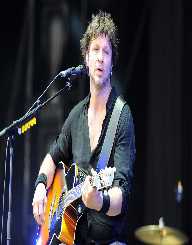 French musician Bertrand Cantat was born on the 5 March 1964 in Pau, Pyrenees-Atlantiques, France. He was raised in Le Havre, and the family later moved to Bordeaux when he was a teenager.

Bertrand Cantat was educated at the Lycée Saint-Genès in Bordeaux.

At school in Bordeaux, Bertrand Cantat met Serge Teyssot-Gay, Denis Barthe, and Frederick Vidalenc. They formed a rock band, Noir Desir which became successful in France with two double platinum albums and three gold. The group emerged in the 1980s and continued throughout that decade and the 1990s before disbanding in the early 2000s.

Bertrand Cantat began a relationship with French actress Marie Trintignant in 2003. She was the daughter of actor Jean-Louis Trintignant and film director, producer and screenwriter Nadine Marquand.

In July 2003, the couple had an argument in a hotel in Vilnius which resulted in Trintignant falling and hitting her head. Cantat had struck her sometimes, and this had caused her to fall. He was sentenced to eight years in prison for murder with indirect intent. After serving four years, Cantat was released on parole on the 16 October 2007.

During 2005 Noir Desir released an album which had begun before Trintignant death. Bertrand Cantat was in prison at the time of the production of the CD and DVD, and he was allowed to be involved. Then in November 2008 Noir Desir released a couple of songs online. The band had plans to release another album in 2009, but this never eventuated with band member Serge Teyssot-Gay leaving the group because of his dysfunctional relationship with Cantat. The group’s drummer Denis Barthe subsequently announced in November 2010 that they had disbanded for good.