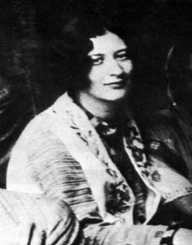 Simone Weil was a French political activist and anarchist who is best known for her religious and political writings.

Simone Weil was born in Paris on 3 February 1909. Her father, Bernard, was a doctor and her mother was named Saolomena. Weil had an older brother named André. Weil decided at a young age to work for the betterment of society. To do so, she felt the need to shun femininity and adopted a male dress.

Simone Weil had a keen interest in ancient languages and world religions as a child. She learned but Sanskrit and Ancient Greek. Weil attended the Lycée Henri IV and then the École Normale Supériere. Weil earned an MA in philosophy.

From her very earliest years, Simone Weil was politically aware. Her father was conscripted into the French army, and from this, she drew a sense of great sympathy for the working classes. Following the First World War, Weil became very interested in Bolshevism. She was very active in worker’s movements in France and continuously wrote about political issues.

Simone became critical of communism later in life seeing it as just as flawed as capitalism. Weil arranged for Leon Trotsky to stay in Paris. While he was there, she debated Trotsky incessantly about the limits of communism and how it could be just as oppressive as capitalism.

Following the rise of the Nazis in Germany, Weil became active in helping fleeing German communists into France. Weil remained part of the worker's movement in France taking part in the strike of 1933. Weil worked as a high school philosophy teacher but continued to identify with the working classes. To build on her support, she used a year’s career break to work in factories so that she could better elate to the working class.

Simone Weil joined Spanish Republican forces during the Spanish Civil War. This was despite her being a professed pacifist. Weil proved an eager but inept soldier. Comrades would try to avoid bringing her on missions due to her lack of ability with a rifle. Less than a year into her time with the Republicans she was wounded and her parents took her home. She continued to write about labor and social issues throughout her life, but these were mostly ignored by those outside the radical left.

Weil’s parents were Jewish but lived and raised their children as secular agnostics. Simone Weil though developed a distinctly Christian outlook on life. During her life Weil claimed to have had a number of religious encounters. The most notable of these came in 1938 when she claimed to have an encounter with Christ. Weil became drawn to the saints of Roman Catholicism but never joined the church.

Although she felt a secure connection with Christianity, Weil felt there was a beauty and truth in some faiths. She was also interested in the ancient mysticism of Greece, India, and Egypt as well as other established religions like Hinduism and Buddhism. Despite her interest in some faiths, Weil felt it was profoundly wrong to compare or contrast beliefs.

Following the Nazi invasion of France, Simone Weil and her parents fled to America as their Jewish ancestry made them targets. Weil moved to Britain and began working for the French resistance. Weil wished to become an agent and return to France but this was denied to her. Her heavy workload and limited diet led to a deterioration in her health. From birth Weil had suffered ill health, suffering from appendicitis as an infant. She was diagnosed with tuberculosis and died on 24 August 1943 in Kent. Weil died of cardiac arrest at the age of 34 and was buried in Kent.

Simone Weil’s work was not well read in her lifetime except in radical circles. Those that knew her often dismissed her as fanciful or crazy. Following her death her religious thoughts came to be widely known. Many hailed her as brilliant modern moral philosopher. Her most famed work The Need for Roots was praised by T.S Elliot. Weil did receive criticism for her negative views on the impact of Judaism and her lack of historical basis for many of her views.